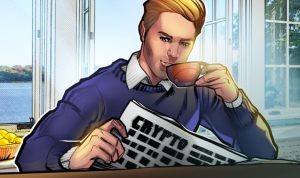 The Ethereum Name Service is having its best month on record for new registrations, account renewals, and revenue thanks to community awareness and low gas fees.

Lead developer at Ethereum Name Service (ENS) Nick Johnson tweeted on May 23 the metrics for the Web3 domain service through May so far. He noted numbers were poised to shatter existing records because they were already at all-time highs, “and there’s still a week of May left.”

Jonson told Cointelegraph on Monday that the main factor contributing to higher demand in ENS domains is that it is a place where people can “form shared communities without any overarching structure imposed on them beforehand.” This has had astounding results for the domain service.

“ENS has reached a critical mass of awareness and adoption; most wallets support ENS names, so the usability factor is significant.”

ENS is an open-source blockchain protocol founded in 2017 that allows people to assign a digital identity to their Ethereum (ETH) wallet. Each name is a nonfungible token (NFT) that ends with .eth and can act as an address, a cryptographic hash, or a website URL.

The data shared by Johnson shows that there have been 304,968 new registrations, 13,260 renewals, and 3,165.85 ETH in revenue so far in May. All of these metrics leave previous highs in the dust.

Johnson also said that ”low gas fees definitely have an impact” on the higher onboarding and renewal rates. To send a fast transaction on Ethereum costs about 22 GWEI as of the time of writing, worth about $0.92 according to gasprice.io. In periods of high volume, gas fees can be higher than $50, which may act as a deterrent to using the network unless in emergencies.

“You can register a 5+ character ENS name for a year for $5 – high gas fees can make the cost several times that, so gas prices have a big impact on the affordability of ENS names.”

Interest in ENS domains has been quickly rising since April when social clubs such as the 10k Club within ENS gained tremendous attention. The 10k Club was formed by owners of ENS domains numbered between 0-9999. Both new registrations and renewals have nearly doubled since then.

ENS’s record high revenues coupled with a market downturn has sparked plans in the ENS decentralized autonomous organization (DAO) to squirrel away funds for ongoing development. Johnson stated that the income slated for funding development and maintenance “for the indefinite future” would help the project weather further market volatility.

“With that guarantee against market effects, additional funds can be used more freely to help grow the ecosystem.”

However, the bullish metrics have not been reflected in ENS prices. The token has been on a steady decline since its November 2021 launch in which all .eth domain holders were airdropped a portion of the supply. ENS has fallen 86% from its November all-time high to $12.21 according to CoinGecko.