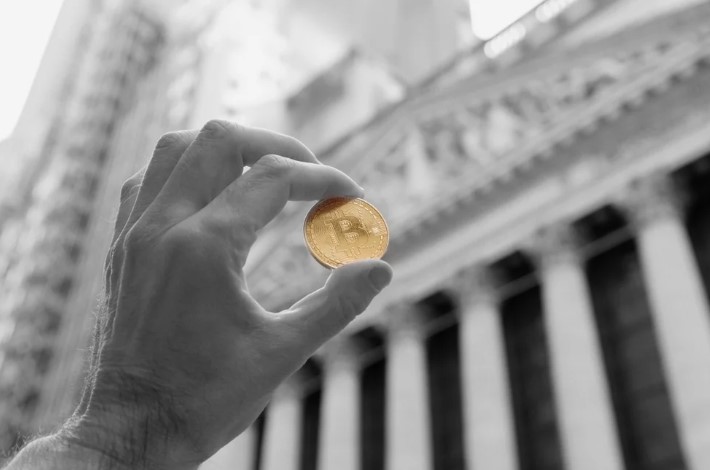 While its launch has been delayed several times, Sprecher is optimistic that Bakkt will be worth the investment that ICE is making to nurture it. Sprecher made the remarks during a February 8 conference call to discuss ICE’s fourth-quarter earnings.

“It’s a bit of a moonshot bet and it’s been organized in a manner that is very different than the way ICE typically does businesses.”

“Bakkt has its own offices, its own management team, etc. They’re well along in building out an infrastructure that I think you’ll see launch later this year.”

FAMILY AFFAIR: SPRECHER’S WIFE IS THE CEO OF BAKKT

Sprecher’s Intercontinental Exchange — along with Microsoft, Starbucks, and BCG — is financing Bakkt, whose CEO is Sprecher’s wife, Kelly Loeffler. So you could say that Sprecher is heavily invested, both financially and emotionally, in Bakkt’s success.

Bakkt, which will facilitate bitcoin futures trading for institutional investors, was supposed to go live in January, but the roll-out was postponed amid the US government shutdown.

Bakkt will provide custody and price discovery for bitcoin — which is regulated as a commodity by the CFTC — in a way that’s designed to be free from market manipulation and fraud.

‘WE’LL DO OTHER ROUNDS OF FINANCING’

Jeff Sprecher says ICE is currently the majority investor in Bakkt. However, he expects to do other rounds of financing for the company at some point.

“Our investment in Bakkt will generate $20 million to $25 million of expense based upon the run rate in the first quarter. We will update you on progress at Bakkt and the level of investment as we move through the year.”

Despite the protracted Crypto Winter, Sprecher says there is tremendous corporate interest in the forthcoming cryptocurrency exchange.

“That infrastructure has attracted a lot of very, very interesting companies that have come: Some that have invested in Bakkt, some are just working with Bakkt to try to tap into that infrastructure for some new use cases that will involve blockchain and digital assets.”

“Obviously, we’ve announced our work with Starbucks and Microsoft. We have very, very large retail franchises…that we hope will be brought into that ecosystem and could create a very, very valuable company out of that initiative if our business plan plays out.”

As CCN reported, Sprecher is confident that digital assets have a bright future, notwithstanding the current slump. “The unequivocal answer is yes [crypto will survive],” Sprecher said in November 2018.

While crypto trolls love to obsessively hate on bitcoin, Sprecher says bitcoin is still the yardstick by which all others cryptocurrencies are measured — and that’s not going to change.

“Somehow bitcoin has lived in a swamp and survived. There are thousands of other tokens that you could argue are better, but yet bitcoin continues to survive, thrive, and attract attention.”

While media headlines about crypto breathlessly focus on its price, insiders caution observers to not lose sight of the forest for the trees. They say there are exciting developments occurring beneath the surface that are far more consequential than whatever the bitcoin price is at a particular moment.

That’s why industry leaders like Binance founder Changpeng Zhao shrug off whatever is happening on the spot market on any given day. Zhao says it’s a waste of time and energy for the crypto community to freak out or be distracted by media hype, which he calls “noise.”