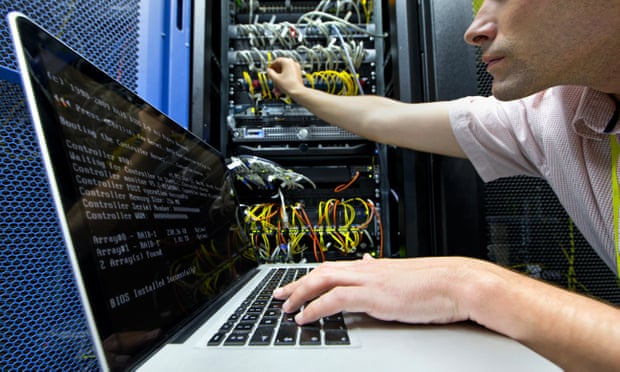 The main aim of the decentralised web (DWeb) is to remove the power of centralised “gatekeepers” such as Facebook and Google, who hoover up the world’s data and monetise it by selling advertising. It reminds me of the original concept of the web, where every computer would be both a client and a server, sharing information on a more or less equal basis.

Of course, that is not how real life works. What actually happens is that you get a power law distribution with a few large entities and a long tail of small ones.

As Clay Shirky wrote in 2003: “In systems where many people are free to choose between many options, a small subset of the whole will get a disproportionate amount of traffic (or attention, or income), even if no members of the system actively work towards such an outcome. This has nothing to do with moral weakness, selling out, or any other psychological explanation. The very act of choosing, spread widely enough and freely enough, creates a power law distribution.”

The web still has plenty of variety, but almost everyone is familiar with one giant search engine, one giant retailer, one giant auction site, one giant social network, one giant encyclopaedia, and so on. Indeed, there is only one giant internet where there used to be dozens of competing networks using many different protocols.

Obviously, it would be better if we all agreed these things in advance, based on open standards. However, people vote with their wallets, and competition results in de facto standards instead of de jure ones. Examples include Microsoft Windows, Google Search and Facebook. Each triumphed in a competitive marketplace.

One of the problems with returning to a decentralised web is that the internet is no longer decentralised. It has been redesigned around giant server farms, high-speed pipes and content delivery networks. It looks increasingly like a broadband television network because that is what it actually does most of the time.

Today’s web is being optimised for the delivery of Netflix movies, BBC programmes on iPlayer, Spotify music, live streams of every major sporting event, and so on. You can upload your own live streams but communications are asynchronous: your downloads are much faster, and much more reliable, than your uploads. It’s really easy to watch 1TB of movies but an exercise in frustration trying to upload a 1TB hard-drive backup.

If you really want to save energy and internet resources, stop streaming stuff. Broadcast TV and radio can reach tens of millions of people, and adding another million adds relatively little in the way of extra power consumption. There is school of thought that it is better for the environment to use CDs or DVDs for albums or films you go back to again and again, or you could at least use digital files stored on your PC or smartphone.

And rather than using Graphite to replace Google Docs or Microsoft Office, just use a word processor offline. If you run Windows, you already have a text editor (Notepad) and a simple word processor (WordPad), and there are plenty of free alternatives. That will reduce global energy use and increase your privacy.

Companies such as Amazon AWS, Microsoft and Google are covering the world with server farms to make information more easily available. That’s harder to do with real distributed systems because the thousands or millions of separate computers may be turned off or otherwise unavailable when you need the data they are storing. Worse, unless it’s replicated, you could lose data.

It’s true that server farms consume an ever-growing amount of electricity, much of it used for cooling purposes. However, the cost is a powerful incentive for operators to use cheaper renewables, such as solar panels, and to reduce their power consumption in other ways. For example, Facebook has built a data centre in the north of Sweden where the air is freezing cold, while Microsoft is experimenting with underwater data centres that are easier to cool.

Microsoft is also sponsoring tree planting in Ireland as part of its commitment to becoming carbon neutral.

A properly decentralised web, based on tens of millions of small servers, would not have the same incentives to cut energy use, nor the same economies of scale. And in reality, I expect DWeb will use the same giant data centres as everybody else.

Bitcoin is having a terrible impact on the world’s energy consumption, and may use almost as much as Austria (8.2GW) by the end of this year. This is despite bitcoin mining making the usual transition from widely distributed – anyone with a PC could do it – to specialised equipment in data centres. However, it’s irrelevant to Graphite and, I suspect, to the rest of DWeb.

Thankfully, GraphiteDocs does not use the Bitcoin blockchain to store anything except your identity. This is the result of Graphite’s decision to use the Blockstack application development system. Apart from that, Graphite uses its own virtual blockchain.

To get started, you use the Blockstack browser to register your name on the Bitcoin blockchain. Once you’ve done that, you can use Graphite and other Blockstack apps. There are 34 in the app store. (Gaia is Blockstack’s decentralised storage system.)

Graphite itself has two obvious advantages. First, all your files are encrypted. Second, you can store them wherever you like. By default, Graphite uses Microsoft’s Azure cloud, but you can connect to Dropbox, Google Drive or some other service.

Your files are encrypted so the storage provider can’t read them, and they can’t be censored.

The distributed web is being promoted by people I admire, including web inventor Sir Tim Berners-Lee, the Internet Archive’s Brewster Kahle and Mozilla’s Mitchell Baker. It also has a valid reason to exist: people really should own and control their own data, not just labour as unpaid serfs for surveillance capitalism. However, most people follow the line of least resistance, so the web is not going to change overnight.

Services like Graphite are worth considering if you need both encryption and the ability to share secure files online, though there are other ways to do this, such as Boxcryptor and Whisply. DWeb apps will need to become easier to use and mobile before they can reach a mass market.