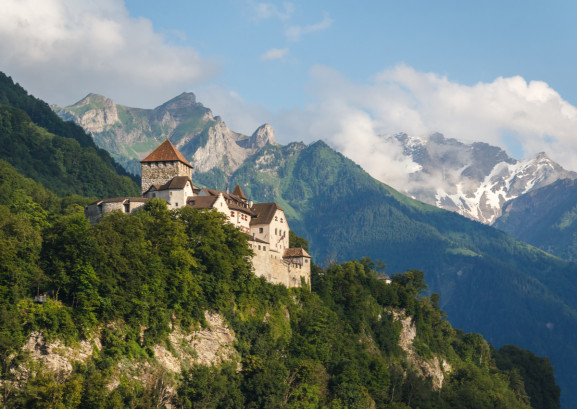 Arriving in Vaduz, the capital of Liechtenstein, is like walking onto the set of Frozen or some other classic Disney movie.

The Prince’s castle sits perched on the side of a mountain, overlooking the small town below. With a population of only 36,000, every citizen of the country could comfortably fit inside Yankee stadium, and a third of the seats would still be empty.

The last relic of the Holy Roman Empire, the principality is safely nestled in the mountains between Switzerland and Austria, about an hour from Zurich. The nation’s passports even have an inset blow-up map showing the country’s location because many border guards around the world are skeptical it is a real country.

In the world of banking, however, Liechtenstein is very much real. For years, the country was viewed and used as a place for wealthy individuals to hide money and evade taxes from their native lands. The result led to a GDP per capita of $139,000 by 2009, the highest in the world.

Intensifying in 2008 and into 2009, however, pressure began to mount on the country from Germany, the UK, and others to change. Internally, as well, leadership within Liechtenstein recognized the time had come to find alternative ways to compete in a global economy. Around the same time, Satoshi Nakamoto rolled out the genesis block of the Bitcoin blockchain, kicking off the Crypto Revolution. Fate was setting the stage for a new stage of growth.

Enjoying membership in the European Economic Area, a customs union with Switzerland, a strong history in global finance, and having the epitome of “small government” that enables rapid regulatory execution, Liechtenstein sees a chance to seize a leadership position in the blockchain-based world of the future. On a recent trip to Vaduz as part of a group of 25 Crypto Explorers, it was abundantly clear to me that the country is “all-in” when it comes to blockchain.

Taking inspiration from the impressive strides made by nearby “Crypto Valley” in Zug, Switzerland, Liechtenstein is moving full steam ahead to become a preferred destination for crypto/blockchain companies to locate and do business.

The country’s regulator, the Financial Market Authority (FMA) issued its first opinion on ICOs in September 2017. Admittedly it is still early days for blockchain in Liechtenstein — only five ICOs have been registered and launched in the country to date, raising a total of $37.5 million, with three of those still ongoing. However, an announcement of pending legislation in March by Prime Minister Adrian Hasler (Liechtenstein is a constitutional monarchy) catapulted the country into a position of increased global awareness within the crypto industry.

The “Blockchain Law,” as it is known, would seek to give crypto companies regulatory and legal predictability as well as enable access to traditional fiat-based banking services. The crypto to fiat “off-ramp” for ICOs that raise money in Ether or other cryptocurrencies is a significant challenge for startups globally. Liechtenstein’s law, should it pass, would have many benefits for blockchain companies, including helping them overcome KYC (know-your-customer) and AML (anti-money laundering) hurdles so they can effectively integrate with the traditional economy. The law was slated to pass July 10 with enactment in early 2019, but a surprise delay has put it on hold. (According to the country’s largest daily newspaper, on the day the bill was to pass, with the press waiting to report the news, it was revealed that the government hadn’t approved the legislation. Since that news broke on the last day the government was in session before summer recess — and no reason was given for the failed approval — observers will be left scratching their heads until the fall.)

Still, the general sense is that the bill will indeed pass. Momentum is strong, as government officials and regulators have put a tremendous amount of thought and effort into how different types of tokens will work, the frameworks for regulating them, and how to have them work in harmony with existing structures.

If and when it is implemented, the Blockchain Act, as explained on the Liechtenstein-based Crypto Nation site, will provide a legal basis for:

One unique fact in the country is that crypto-to-crypto trading is not regulated. As Thomas Feldkircher, a lawyer at Naegele, the country’s leading crypto-focused law firm, said, “Converting from Bitcoin to Ether is like converting from wheat to rice. Liechtenstein does not regulate commodities.”

It comes as no surprise then that crypto exchanges are starting to pop up as well, with the Liechtenstein Crypto Exchange (LCX) launching at the end of July. Monty Metzger, the CEO of LCX, said, “The new law and the world-class reputation of Liechtenstein as a financial powerhouse is going to make us an attractive destination for many, many companies as the token economy takes hold.”

In addition to the clarity and certainty the law will provide, the country seeks to further differentiate itself by offering unparalleled responsiveness from the FMA in terms of regulatory approval. In a market as fast as crypto, time-to-market is a competitive advantage that Liechtenstein seeks to enable.

“Because we are so small, blockchain companies can move a lot faster here than other countries,” said Patrick Bont, the country’s top regulator. “You can call us for a meeting on Monday morning and we can meet you for lunch on Tuesday or Wednesday. Very few other places can do that consistently.”

It is not just regulatory speed that makes a difference. The government, in cooperation with the private sector, is seeking to create an ecosystem that is welcoming and enabling of blockchain companies.

Thomas Duenser, senior advisor to the Prime Minister, champions the idea of “Innovation Clubs,” a crowdsourcing concept where entrepreneurs are encouraged to submit ideas to improve the business framework in the country.

Other entities and vehicles exist to foster innovation and growth, such as the Crypto Country Association and the government-approved Liechtenstein Venture Cooperative, a quick way to form recognized legal entities that provide inventors and investors some degree of protection as they work to bring innovation to market.

All of these ingredients are critical to creating a blockchain-friendly environment, but a thriving blockchain ecosystem wouldn’t be possible without an established bank, plugged into the global financial system, to make it all work. This is where Bank Frick comes in.

Owned 65 percent by the founding Frick family and a relative newcomer to the Liechtenstein banking scene (it was  founded in 1998), the institution has been leading the charge in offering crypto-related services. In September 2017, the bank offered a certificate (a private placement vehicle) for investment in Bitcoin and Ether. Then, in February, it began offering direct investment to its clients of five of the largest cryptocurrencies. Today, it is a recognized leader in the space, having helped over two dozen ICO projects establish traditional bank accounts with many more in the pipeline. Today, Bank Frick has approximately 200 clients in the crypto and blockchain space, including both corporate clients (ranging from cryptocurrency mining groups, brokers, exchanges, traders, and ICOs) and private clients engaged in the crypto and blockchain space. It receives up to 40 new requests every day.

Opportunity and challenges for Liechtenstein as a crypto power player

An impressive amount of groundwork exists for Liechtenstein to emerge as a global hub for crypto innovation and growth. Yet, numerous challenges exist.

The competitive landscape for jurisdictional crypto-startup arbitrage is intensifying. Liechtenstein’s neighbor, Switzerland, may move a bit more slowly but has perhaps one of the strongest international crypto brands as a country. Others, such as Malta (which lured Binance), Gibraltar, and Singapore, are all working rapidly to ride the crypto wave towards economic growth. They all possess at least one significant leg up on Liechtenstein: People have heard of them. The principality has a significant awareness hurdle globally.

The country’s tiny population also means fewer resources devoted to effectively communicating the its key value proposition and advantages. Even the most dedicated and passionate crypto-enthusiast (like your humble author) had to go to multiple places to get direction on what to do and how to do it. The key concepts are there, but the messaging needs coherence and focus if Liechtenstein really wants to be regarded as top-tier.

The recent delay in the passage of the Blockchain Law could prove to be a problem, since crypto-startups are looking to domicile and begin operations quickly in this “land grab” phase of the market’s evolution. However, following an official statement from Mr. Thomas Weidmann, Head of Communication at the Government of Liechtenstein, most crypto-insiders are confident the bill will be enhanced and ratified as originally planned. In short, the commitment is still there.

Finally, there is the risk of no product-market fit. For example, there was a lot of collaboration in the US for equity crowdfunding, from the bipartisan JOBS Act, to three years’ worth of rule-making with the SEC, to the private companies that helped write the law and run the crowdfunding services. When all was said and done, equity crowdfunding hasn’t seen the level of usage that was predicted. ICOs appear to have replaced that vision. All in all, the work put into equity crowdfunding delivered little in return for the huge amount of public resources and time that went into it.

Whether Liechtenstein becomes a crypto power player remains to be seen, but many in the private and public leadership of the country are committed to making a go of it.

If they do make that leap, Liechtenstein as crypto nation won’t be a Disney fairy tale. It will be a immutable reality.