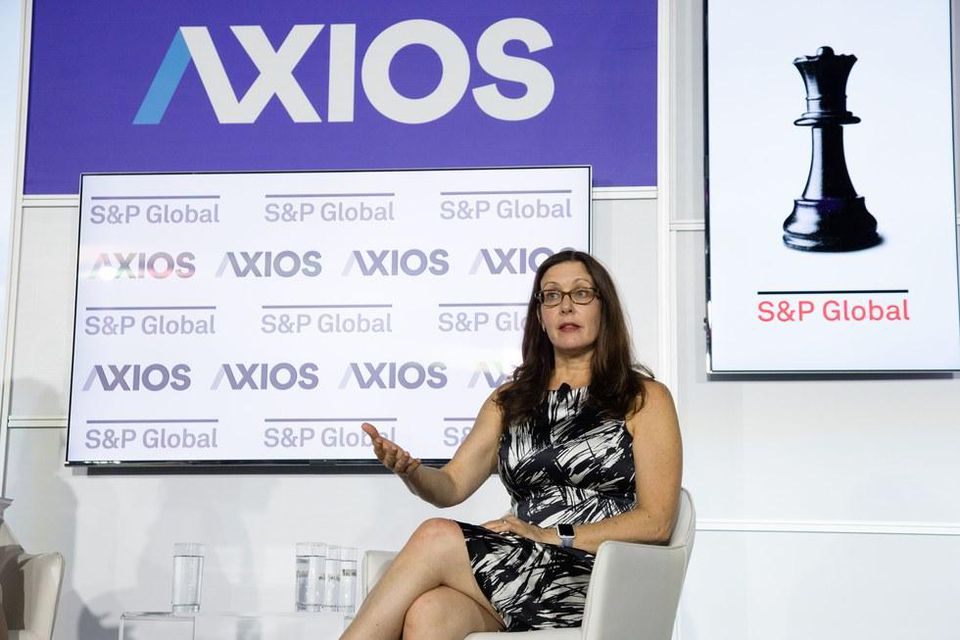 She also shies away from the spotlight, so the media tour that has her on the road speaking about the billion dollar company she cofounded, Kabbage, is not her natural position. Petralia knows part of her job as President is to promote the company, but also understands the value of representation on stage, and knows there is a benefit in young women seeing others who look like them in the public eye as leaders, to make them believe they can do it, too.

Petralia remembers a founders’ event at J.P. Morgan that had so few women that the host company planted women from their organization in the crowd. This was surprising, since she also learned that 40% of CEO Jamie Dimon’s management team are women. “The founders of these venture backed companies were almost all men. Venture capitalists are often dudes, so there can be selection bias,” she mentioned.

“We met with so many venture capitalists before I even realized there were no women. Finally a woman walked into the room and was not there to bring me water, she was there for the meeting. I didn’t notice it until then,” Petralia said reflectively, “I notice it more now.”

As a kid in the 1970’s, the executive had seen the huge supercomputers with punch cards her mom and stepdad used as professors, but was first personally exposed to technology when her father brought home a TRS 80 computer. Still, she did her work on typewriters in high school and college, a time she refers to as her own personal “technology dark age.”

Though she was slow to pick up tech, Petralia has always been comfortable figuring things out, from fixing light sockets to putting up drywall in a house. When a family friend asked her to be involved in a tech company he had invested in, she realized technology could be used to give people what they need faster and better than before. She ditched her graduate degree program in English to jump at the opportunity to join the tech industry.

“Importantly, I’m not afraid to say yes, a lot. Many people spend a lot of time figuring out why they should say no. Say yes! ” she advises.

She is passionate about Atlanta. In the 1950’s the Fed tested automated payments there, and the payment processing industry grew around it. When Kabbage Cofounder Rob Frohwein approached her about an idea for a lending business, Petralia immediately saw the potential in helping small businesses get access to capital who had a hard time doing so before.

Kabbage focuses on lines up credit up to $250,000, formerly a black hole in lending too small for major institutions to bother with, but too large for a personal loan for most business owners. With their recent $250 million fundraise led by Softbank Group Corp, the company is known as a “unicorn,” a coveted title meaning the company has a valuation over $1 billion.

The company is up against stiff competition, with PayPal making a push into business lending last August with its acquisition of online lender Swift Financial. Recently PayPal also announced a deal to acquire Swedish payments company iZettle for $2.2 billion, expanding into payments terminals.

Kabbage is not sitting idly by, announcing that they will launch payments services by the end of this year.

“We are definite frenemies with PayPal,” Petralia chuckles, “We work with their customers but they compete with us directly, they offer working capital loans. Will now be competing on two fronts with them.”

“We were really interested in getting access to fantastic data engineering talent, and we already worked with them and use them internally,” she stated. “I was opportunistic, and it’s a great opportunity for us to continue using that data and create more efficiencies for our internal processes.”

Petralia was listed alongside Sheryl Sandberg and Oprah Winfrey as one of Forbes’ 100 most powerful women in 2017, the same year she gave birth to her second child. Her husband has stayed home with their children throughout Petralia’s rocket ship of a career, and the COO encourages companies to implement both maternity and paternity leave.

“There’s more we can do to create that equality if we wanted to. It goes back to saying yes. If there’s something you want to do, figure out a way to do it.”