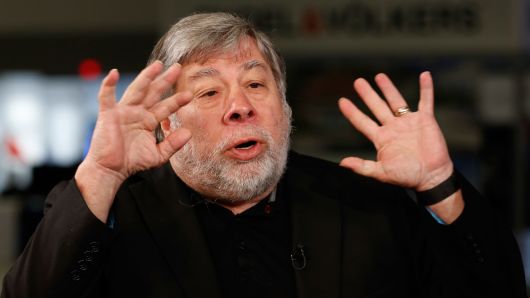 Apple co-founder and noted bitcoin bull Steve Wozniak says the hype around blockchain is similar to what he saw in the dotcom era, with companies going belly-up at a rapid rate.

“It was a bubble, and I feel that way about blockchain,” Wozniak said Tuesday on stage at the NEX technology conference in New York.

A good portion of the companies promising to do life-changing things on the internet quickly went bust, Wozniak reminded the audience.

Still, he said blockchain technology has real implementation potential, because it’s “decentralized and totally trustworthy.” But like the internet, it could take longer than expected to catch up to its early hype.

“If you look now you say all that internet stuff happened, we got it, it just took a while,” Wozniak said. “It doesn’t change in a day, a lot of the blockchain ideas that are really good by coming out early they can burn themselves out by not being prepared to be stable in the long run.”

Bitcoin was the first use for blockchain, but the technology has been applied to countless other applications since. It records transactions on a public, distributed ledger, which advocates tout as faster and more secure and say gets rid of the need for a third party in many cases.

Wozniak highlighted Ethereum as having potential to outlive the hype because of its use case, and ability for programmers to build their own related projects. Ethereum is the name of the foundation that created the digital token ether, which was first launched as a fundraising effort to develop the platform. Companies like Microsoft and J.P. Morgan, are developing uses for the Ethereum blockchain.

Bitcoin, which Wozniak has called digital gold, despite being down more than 50 percent this year, is still “just amazing,” he said.

Wozniak founded Apple with Steve Jobs in 1976 and was behind the launch of the company’s first personal computers. He sold all but one bitcoin last year when the digital asset was soaring to a high near $20,000 after originally buying the cryptocurrency so he could one day travel without carrying cash or credit cards.

“All of the sudden it was way down, then way up in the sky,” he said. “I got scared, and sold everything but one bitcoin.”

Wozniak also floated the idea of using blockchain for social networks, and a competitor to Facebook, which he said is ripe for disruption and operating a monopoly at the moment.