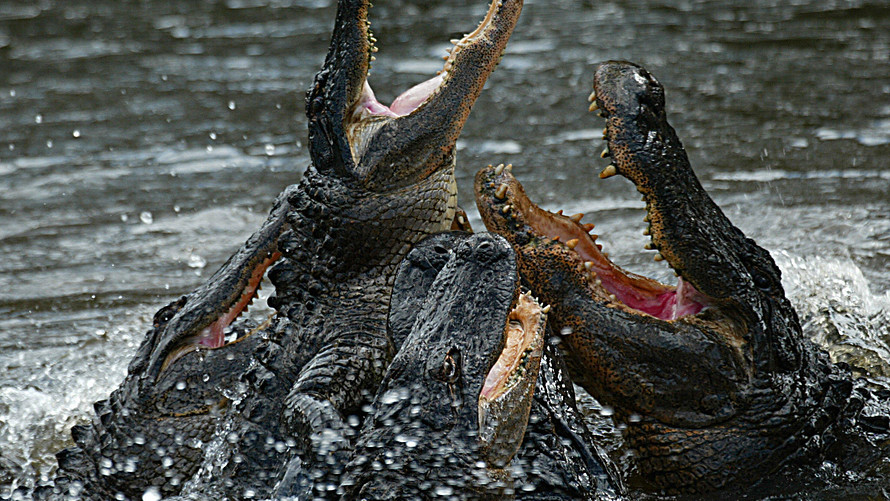 One of the hottest segments of the exchange-traded funds industry in 2018 involves a technology that is extremely new, often misunderstood and has yet to be utilized or developed in widespread fashion.

Blockchain, the technology that is best known as what underpins bitcoin and other cryptocurrencies, has become one of the hottest buzz words on Wall Street. Just as companies that added crypto-related terms to their names saw massive short-term boosts to their share price last year — a trend that fizzled when bitcoin prices collapsed in early 2018 — so have ETF issuers drawn unusual investor interest by releasing funds dedicated to the theme.

This year alone, no fewer than seven ETFs related to blockchain have debuted. One, the Horizons Blockchain Technology & Hardware Index ETF, begins trading on Thursday on the Toronto exchange. This comes just a day after the launch of the Nasdaq NexGen Economy China ETF BCNA, -2.89% which focuses on Chinese companies determined to be involved with the technology.

“Call it a feeding frenzy, a gold rush, whatever you like. These providers are looking for the next hot sector and they’re trying to get their surfboards positioned ahead of the wave,” said Ben Johnson, director of global ETF research at Morningstar. “They wouldn’t be releasing these funds if they didn’t think there would be demand. But that’s different from whether this theme has a lasting argument from an investment perspective. That’s a question I’m skeptical about.”

Blockchain ETFs are counted among “thematic funds,” meaning they are dedicated to a niche sub-sector of the equity market. In this case, the funds own stocks that have blockchain-related patents or investments, or which have otherwise announced initiatives in the technology.

Thematic funds are popular for smaller ETF providers trying to establish a toehold. In large part, this is because major asset-class categories — core equity, bond, or commodity products — have for years been dominated by a few huge players who offer exposures to these areas at rock-bottom costs relative to any would-be competition. Other fund categories, such as “smart beta” ETFs, are similarly dominated by Vanguard, BlackRock BLK, -0.30% and State Street Global Advisors STT, +0.47% , which together hold more than 70% of global ETF assets, while investors have shown limited interest in actively managed ETFs.

“The growth of ETFs over the past 10 years has been incredibly robust, and it’s a space that a lot of sponsors want to participate in, though they don’t have a lot of options remaining,” said Noel Archard, global head of SPDR product at State Street Global Advisors.

“The low-cost beta space is covered already, and the active space takes at least a three-year track record to build credibility. For smaller sponsors, a thematic fund is something that can be easily explained to people, whether you agree with the investment thesis or not, and it providers an entry point into a segment of the market where the larger players don’t have a commanding hold.”

Regardless of their performance, most thematic funds struggle to attract assets, leading many to close as they prove too unprofitable to run. For instance, earlier this month, a fund dedicated to whiskey companies announced it would be liquidating. This is part of a broader trend in the ETF space, which has seen a growing number of both launches and closures.

There have been a few examples of thematic funds breaking out into bigger success. Notably, two ETFs dedicated to the theme of robotics — the Global X Robotics & Artificial Intelligence ETF BOTZ, -0.26% and the ROBO Global Robotics & Automation Index ETF ROBO, -0.73% — have each amassed more than $2 billion in assets, a remarkable sum for a category where many fail to garner the $50 million that is usually cited as a threshold for profitability.

Morningstar’s Johnson suggested that issuers were “looking for the next BOTZ,” and that the hype around blockchain made it a prime candidate. He added that sponsors chasing “buzzy” themes was so common in the fund industry that the blockchain “frenzy” hardly represented an extreme example of the trend.

So far, some of the sponsors who bet that blockchain would prove irresistible to investors are seeing this hunch pay off. The Amplify Transformational Data Sharing ETF BLOK, -1.37% currently has $187 million in assets, while the Nasdaq NexGen Economy ETF BLCN, -1.15% has $128 million, according to FactSet. The other funds have seen lower inflows: the First Trust Indxx Innovative Transaction & Process ETF LEGR, -1.24% has $46 million in assets, while the Innovation Shares NextGen Protocol ETF KOIN, -1.22% has $14 million, and the REX BKCM ETF BKC, -0.98% is at $6 million. Asset data was not available for the funds that launched this week.

The funds are either actively managed, meaning their holdings are selected by a manager, or they track unique indexes, meaning they will perform differently from each other. 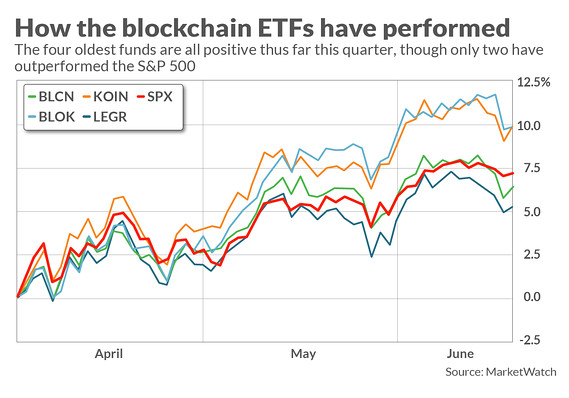 The success of the Amplify and the NexGen products suggests there had been pent-up demand for a fund with this theme. Both debuted on the same day in January, making them the first to market.

“It’s fair to say we got most of our assets from having a first-mover advantage. At the end of the day, timing is important, having a good ticker is important,” said Eric Ervin, chief executive officer of Reality Shares, which sponsors both the NexGen Economy ETF and the China-focused one.

“I do think we’re approaching the space differently [from the other funds], and smartly, but I wouldn’t have wanted to be the fifth firm to launch a blockchain ETF. It feels like there’s a little bit of ‘me too’ going on, people jumping on the bandwagon. The space is getting heavily crowded, and the multi-billion-dollar question is whether the market can support this many.”

That so many blockchain funds have been launched at a time when blockchain itself remains a niche technology speaks to how sponsors are rushing toward any idea that could pay off. One criticism of thematic funds is that the industries they track are sometimes so new that they don’t have a large number of “pure plays,” or companies completely dedicated to the theme in question. In the case of blockchain, there are basically no established public companies that are solely involved with it; the top three holdings of the NexGen fund are Advanced Micro Devices AMD, -5.27% , Intel Corp. INTC, -2.38% and Microsoft Corp. MSFT, -0.72% Because such stocks move on non-blockchain issues, the fund is likely to as well.

Ervin admitted that this represented “a dilemma” for fund sponsors, because waiting until the industry was more established and developed would have meant losing the first-mover advantage.

Blockchain is essentially a decentralized ledger used to record and verify transactions, one not requiring the participation of a middleman like a bank or government. Instead, so-called “miners” solve complex computational problems to validate transactions; because of the way the network is constructed, it is nearly impossible for transactions to be forged. Interest in blockchain and bitcoin surged over the course of 2017, a year when the price of bitcoin BTCUSD, +0.00% went from under $1,000 to nearly $20,000. Bitcoin has since collapsed, and last traded below $7,000.

Blockchain usage remains fairly small, and while many companies have announced initiatives, most of the projects remain in the development stage. According to HSBC, which cited data from Aite Group, roughly $200 million was invested in blockchain last year. That’s expected to grow rapidly, topping $300 million by the end of this year and climbing to $400 million by the end of 2019.

It isn’t just ETF sponsors who see blockchain as a potentially major theme. Analysts have said it could prove to be a transformative technology, one equal in significance to the development of the internet. In October, UBS estimated that blockchain technology could add as much as $300 to $400 billion of annual economic value globally by 2027, adding that it “is likely to have a significant impact in industries ranging from finance to manufacturing, health care and utilities.”

Gregory King, the chief executive officer of Rex Shares, which sponsors the REX BKCM ETF, said there was “something meaningfully different with blockchain technology, and how it can be applied to generate profits.”

He admitted that there had “clearly” been a first-mover advantage in terms of the funds that garnered the most assets, “because the sector was of so much interest to investors.” However, he said that “performance will demonstrate itself over time,” which could help smaller funds make up for lost ground if they show better performance.

“There have been plenty of examples of a new technology coming on the scene creating meaningful returns for investors. I don’t have a strong view on whether this space is overproliferated; it’s up to investors to decide if they want exposure, and at what stage of the cycle,” he said. “Right now there’s plenty of information for them to decide if they want blockchain in their portfolio, and what strategy is the best.”