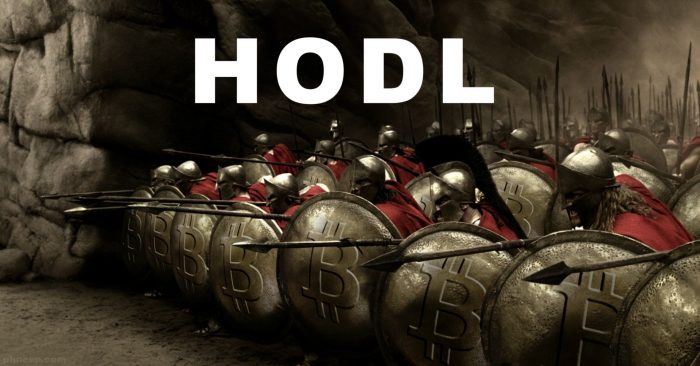 If you’ve bought into EOS with an intention to be a long-term HODLer without having to do anything with the tokens, you might want to reconsider. According to the project’s Constitution, if your account is inactive for 3 years, it may be put up for auction. A closer look EOS’ highest law can certainly make you raise an eyebrow.

EOS, the project which raised $4 billion in a year-long Initial Coin Offering (ICO), has put down a set of rules in what is referred to as their Constitution. While rumors have it that this is just a proposition and that the EOS community has to ratify it, the very first introductory statement of the document reads:

This constitution is a multi-party contract entered into by the Members by virtue of their use of this blockchain.

LACK OF DEFINITIONS AND A LOT OF CONTROVERSIES

The document, placed in the projects GitHub, is contributed by two people – Thomas Cox, Block.one’s VP of Product, and Danial Larimer – the company’s Chief Technical Officer (CTO). Taking a closer look at the text, though, would make anyone, even people without any legal background, ask a few questions.

Starting off with the sentence mentioned above, the lack of a definition for the term “Member”, could constitute future issues. Let’s break it down a bit.

This Constitution and its subordinate documents shall not be amended except by a vote of the Token Holders with no less than 15% vote participation among tokens and no fewer than 10% more Yes than No votes, sustained for 30 continuous days within a 120 day period.

As we’ve already reported, 10 addresses hold 50% of all EOS tokens. In theory, 10 entities have the complete constitutional freedom to dictate the way this fundamental law turns out.

Circling back to the definition of a “Member” – as it’s currently not established, a potential vote can essentially define it in any way the majority finds suitable. But even if it was defined, those 10 entities would have the power to change it. As a matter of fact, they can change whatever they want, as per the current version of the text.

In other words, while we can presume that a member is anyone who holds any amount of EOS token, that’s not defined, nor are they referenced.

The logical question here is: what if the majority decides that in order for one to be a Member, one has to have a specified amount of tokens?

Article XVIII of the Constitution states:

Members agree to hold software developers harmless for unintentional mistakes made in the expression of contractual intent, whether or not said mistakes were due to actual or perceived negligence.

First off, the terminology used in this clause makes it particularly hard to decipher its actual purpose. What is more, it’s hard to make any kind of differentiation between “actual” and “perceived”, when it comes to negligence.

Legal technicalities aside, spreading immunity over unintentional and negligent mistakes is risky, if not dangerous. Especially when the definition for a “developer” is so broad, according to the same document:

Each Member who makes available a smart contract on this blockchain shall be a Developer. – Article VIII of the Constitution.

If the intention of this Constitution is to truly serve as a fundamental law, which is the very definition of a Constitution in the first place, determining whether a developer has acted negligently or not will have to serve as merit when defining his responsibility and whether he can be held responsible at all.

A Member is automatically released from all revocable obligations under this Constitution 3 years after the last transaction signed by that Member is incorporated into the blockchain. After 3 years of inactivity an account may be put up for auction and the proceeds distributed to all Members by removing EXAMPLE from circulation.

Presumably, this rule intends to stimulate usage and activity. However, it also outlaws all investors who’ve put their money into the project, believing that it would do well from a pure, straightforward investment perspective.

Furthermore, it suggests that the EOS’ executives (the ones who contributed and presumably drafted the text), for whatever reason, are excluding the possibility that long-term investors would be active. It’s worth pointing out that traditional Constitutions are also punishing inaction. However, there are obligatory requirements where said inaction is penalized only and if it causes or could have caused harm in any shape or form.

EOS’ first and foremost law, however, doesn’t give any explanations as to why inactivity is being formally penalized, which goes against the very nature of a constitutional document.

Unfortunately, the above does not even begin to describe all the loopholes which can easily be abused by the powerful few of EOS.

While EOS New York is making the case that the aforementioned document is not the “final” version, and that it only constitutes a proposal, that is not how it looks. Nowhere in EOS’ official whitepaper is it mentioned how said Constitution is to be enacted or who is the one who should have proposed it in the first place – the only thing we know is the way to change or amend it.

And amid all this confusion, a humorous, yet painfully spot-on Twitter comment on the matter hits the sweet spot: 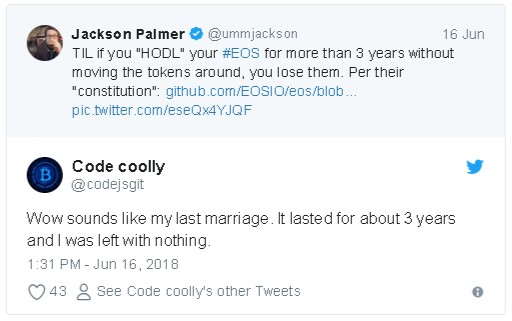