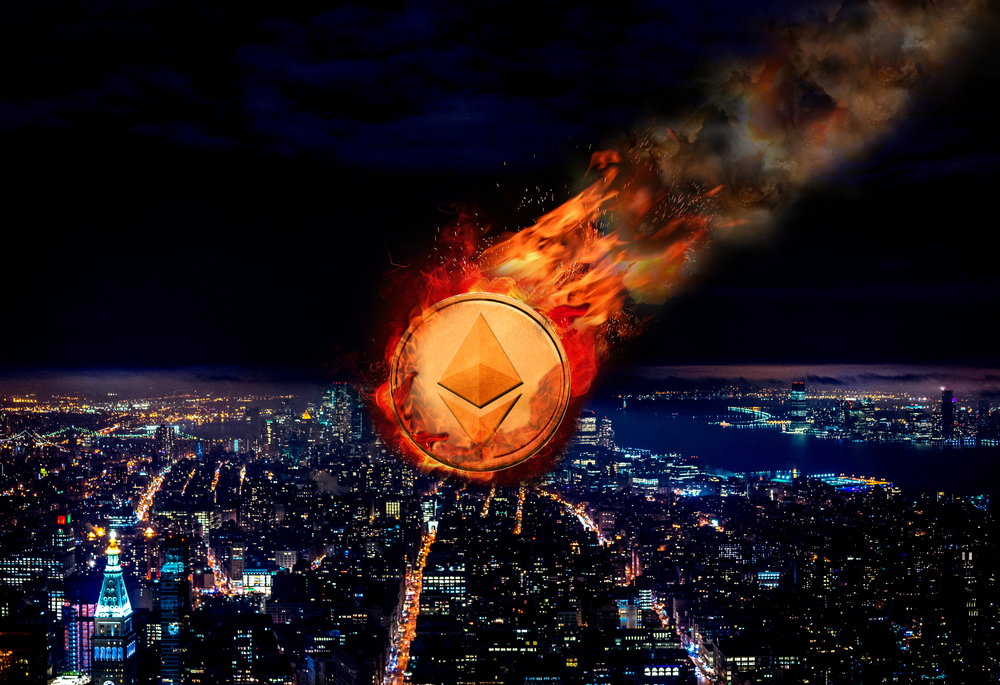 Since its launch in 2014, Ethereum has risen quickly to prominence, and has been secure in the No.2 place in market cap rankings for a while now.

But that hasn’t stopped new startups from making a bid for its position as the primary facilitator of digital app creation services in the crypto world today.

Perhaps the most hyped Ethereum killer of all, and heir apparent to the throne is EOS – or Ethereum On Steroids according to some.

EOS is perhaps the most worthy of the title. The EOS token’s highest peak to date did not come in January as you may expect, but towards the end of April when one EOS token was worth $20. A dip in May saw it crash back down to $10, but now trades for $14 at the time of writing, and is growing at this very moment.

Unsurprisingly, the announced launch of the EOS blockchain coming in early June has pushed EOS’ recent growth, including a 17% rise in the past 24 hours.

But just how close is EOS to dethroning Ethereum?

Well, the project is aided by the presence of former Steemit and Bitshares developer, Dan Larimer. Larimer is a household name in the crypto world due to his involvement in successful past projects, and such a wealth of experience could prove decisive for the EOS platform.

The PoW system is more energy consumptive, and less scalable than Proof-of-Stake. However, the scalability of EOS comes at the price of having a more centralized system, with certain dedicated block producers taking the place of hundreds, or thousands, of miners.

The recent EOS crowd sale took place over the course of an entire year, and raised $4.2 billion in total – making this the most successful crowd sale on record.

This strong backing from consumers far outweighs the relative popularity of Ethereum upon launch, and makes EOS one of the so-called Ethereum killers to keep an eye on. However, if Ethereum developers decide to scale their network, then one of the main benefits of EOS gets wiped off the table immediately.

NEO is the ‘Chinese Ethereum’ which has been touted as a possible challenger since its rebrand in 2017.

Previously known as Antshares, the project floundered initially. But a strong marketing push and rebrand to NEO saw the company take off, and it has floated around the 10th/11th place in market cap rankings ever since.

NEO offers many of the same features as Ethereum, including a creation platform for third-party decentralized applications, as well as smart contracts.

Unlike Ethereum, NEO also caters for the creation of digital assets – where users can tokenize real world assets in digital form, and conduct trades based on their real-world value.

Another of NEO’s unique features is its integration with regulatory bodies, particularly those based in China. The Chinese government have proven notorious for their desire to control the actions of cryptocurrency start-ups, and many are unsure whether such government oversight in ultimately a good or bad thing.

NEO has a strong base to build on and its daily trading volume frequently exceeds $100 million. However, much higher adoption will be needed to knock Ethereum off its perch.

Cardano is yet another self-proclaimed successor to Ethereum, and while this top 10 crypto has an established market cap and strong trade volumes, the truth is it’s still a long way away from any kind of functional release.

The project is fronted by Charles Hoskinson – famous for his early work on Ethereum with Vitalik Buterin, and active developer within the crypto space.

Much of Cardano’s $62 million ICO funds came from investors located in Japan, spawning a wave of commentators taking the easy road of referring to Cardano as the Japanese Ethereum.

Such claims are typical of hopeful Ethereum killers however, and only time will tell how Cardano fares. As of this moment, the team have a very long roadmap in front of them – and that’s without accounting for the time it will take to attract adoption of their project.

As an Ethereum killer, Cardano is an underdog at best.

I Could Have Been a Contender – Stratis, Lisk, Waves

Stratis uses C# (C Sharp) as its programming language, offering a much more accessible path for developers compared to Ethereum.

Lisk (LSK) sets itself apart from its competitors by using sidechains to conduct transactions and carry out smart contracts, without having to overload the main blockchain with every transaction on the network.

Additonally, Lisk uses JavaScript in its construction, allowing for the creation of smart contracts and decentralized apps using a well-known programming language which could end up being far more useable than Ethereum’s.

Waves (WAVES) is a platform seeking to take over from Ethereum’s currency creation functions. Unlike Ethereum, Waves doesn’t require the creation of multiple smart contracts to launch a new currency, but instead includes this feature in its core wallet.

A major strong point for Ethereum is its established user base. It will take years for these ambitious firms to form the kind of user base that Ethereum has – and even that would only come after the completion of extensive, on-going roadmaps.

Ultimately, Ethereum could easily switch to more scalable systems tomorrow if it wanted, but that would come at the cost of decentralization and security.

Many crypto firms are biting at Ethereum’s heels, but it really may only take a sudden kick to knock them all off again.