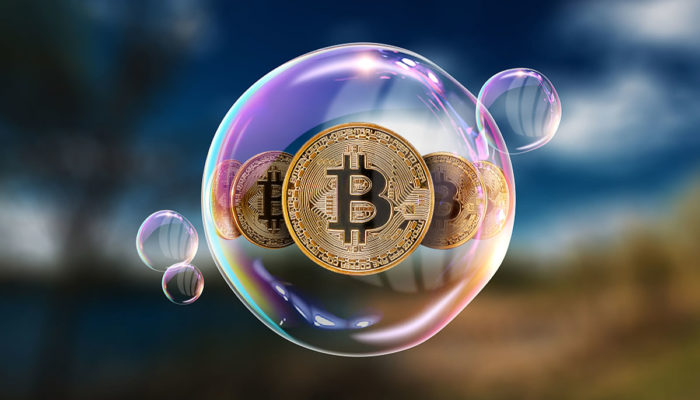 Tulip mania was a period in the Dutch Golden Age during which contract prices for bulbs of the recently introduced and fashionable tulip reached extraordinarily high levels before dramatically collapsing in February 1637. Some skeptics consider Bitcoin to be the tulip bubble of the 21st century, but it’s really not so simple.

Let’s consider the theory of Hyman Minsky, the U.S. economist whose theories on financial fragility were highlighted during the 2008 collapse of the housing market. According to Market Watch, he believed that an asset bubble has five stages: displacement, boom, euphoria, profit-taking, and panic.

Under this framework, policy adviser at the Federal Reserve Bank of San Francisco, Joost van der Burgt, says that if Bitcoin is in fact a bubble, it’s likely at the beginning of the ‘profit-taking’ stage, meaning that ‘panic’ is not here yet, but is coming.

Looking back, according to van der Burgt, the ‘displacement’ phase of the bubble came in the years after the release of the Bitcoin white paper in October 2008. In those early stages, the concept of the coin was catching on, but it didn’t happen over night. Remember, Bitcoin didn’t trade above $100 until 2013.

The next phase was the ‘boom’ phase, which van der Burgt describes as follows:

The subsequent ‘boom’ phase is characterized by prices rising slowly at first, but then gaining momentum as more and more participants enter the market, fearful of missing out.”

In this stage, fear of missing out (FOMO) saw companies attempting to capitalize on the industry by getting involved with coins and blockchain. In some cases, companies simply added the word blockchain to their names in attempts to stir up interest from investors.

Then came celebrities, like Steven Seagal and Floyd Mayweather, who attempted to get a piece of the action by endorsing newly developed cryptocurrencies. Unfortunately, in most cases, these companies with celebrity endorsements have more often that not been exposed as frauds and subsequently shut down.

Moving closer to the present, van der Burgt argues that the Bitcoin bubble entered the ‘euphoric’ stage, which he claims parallels the period leading up to the 2008 financial crisis.

The euphoria phase is also when people start to borrow extensively to finance their investments,” van der Burgt wrote. “According to a recent survey, 18% of active bitcoin investors have financed their investments by credit card, and 22% of this group indicated that they have not yet paid off their credit card balance.”

Now, after the price of Bitcoin lost more than half its value since peaking in late-December 2017, van der Burgt believes that the market is entering the ‘profit-taking’ stage, a phase where so-called smart money begins to head for the exits, leaving only one step left before the bubble pops. “The subsequent ‘panic’ phase, should it come to that, commences when reality sets in and bitcoin’s price would substantially crash,” wrote van der Burgt.

Fortunately, van der Burgt admits that he could be wrong, and that, as we here at NewsBTC believe, the digital coin will (despite the volatility week to week or month to month) continue to rise in value. He writes:

Then again, maybe bitcoin is different than anything we have seen before, and maybe a decade from now its market capitalization will be sky-high as it attains the status of a new global currency.”

While it is possible that Bitcoin’s rise is in some ways comparable to a bubble, it’s almost impossible to truly know. One thing worth remembering is that the coin and the underlying blockchain technology have a plethora of real-world applications (tulips, it can be said, are simply decoration), and as van der Burgt states, it could become a “new global currency.” I think that’s much more likely.