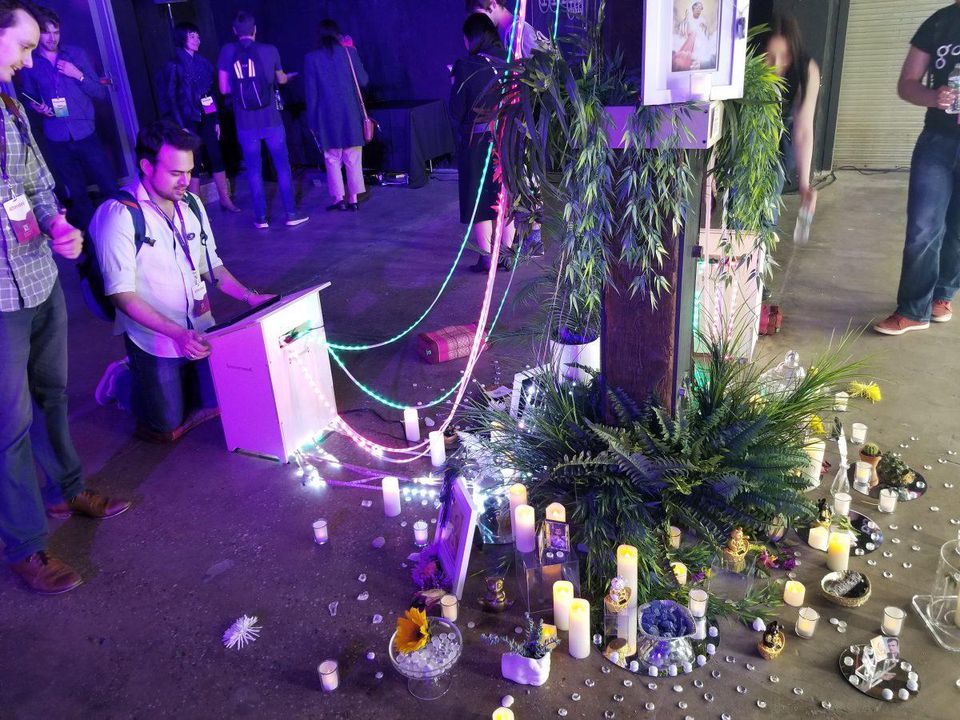 The humming of a bronze meditation bell told a small class of yoga students it was time to change positions at the Ethereal Summit in Brooklyn, which concluded Saturday after two days of events focused largely on building products using the Ethereum blockchain.

On the other side from the Zen Zone that housed the yoga class was an art gallery filled with nine mostly experiential exhibits, highlighted by a neon altar to Satoshi Nakamoto, the pseudonymous inventor of bitcoin, in front of which event participants knelt — perhaps in jest.

Similar to last year, the event was hosted at an old factory in one of the cooler sections of Brooklyn, by Ethereum startup incubator, ConsenSys, and continued in its tradition of being about as quirky and fantastic as it was thought-provoking.

But what was different this year was a sense that good ideas and noble ambitions aren’t enough to change the world if there’s no one there to execute them. Much less, actually find a business model that makes them sustainable.

So, in what is increasingly becoming a trend at blockchain events around the world, the focus at this year’s Ethereal Summit, which is part of an ongoing Blockchain Week in New York City, was largely on moving past making money trading cryptocurrency to making money making businesses, according to event co-creator and ConsenSys experience design lead, Saraswathi Subbaraman.

“The Ethereal Summit will be a success if people take a critical pause to reflect on all of the work that’s being done and create a truly decentralized, accessible, empowered future for people,” she said.

To that end, Ethereum Foundation executive director, Aya Miyaguchi, kicked off the event on a somber note, and called the audience of 1,400 people to take action.

Miyaguchi, who was appointed head of the influential non-profit foundation in February, recounted her early days learning about Ethereum, and the potential impact the cryptocurrency that stores value without the need of banks could have by giving women around the world the ability to take ownership of their own finances.

Miyaguchi then recounted recent criticism of the Ethereum community by the Ethereum creator himself, Vitalik Buterin. In December 2017, when the total cryptocurrency market cap had reached half-a-trillion dollars for the first time, Buterin tweeted his doubts as to whether supporters of the technology had actually “earned” that value. Instead, he questioned in a lengthy Twitter stream if the actual products being built and people being helped by the technology actually justified that value.

To help ensure that other doubters who shared Buterin’s concerns could soon be silenced forever Miyaguchi called on the audience to “buidl” instead of “build,” a play on the cryptocurrency jargon, “hodl,” that emerged from an early user’s mistyped enthusiasm to “hold” their investment.

“Blockchain has the potential to recover the balance that society has lost,” Miyaguchi said. “And I believe Ethereum has a community who cares.”

The possible reasons for the slow time to launch are many.

Ranging from perceived instability of the price for Ethereum’s cryptocurrency ether, which rose from $90 one year ago to a peak of $1,365 in January, only to collapse again to its current price of $708, to uncertainty over the regulatory climate, building on with the technology has been in many ways a moving target.