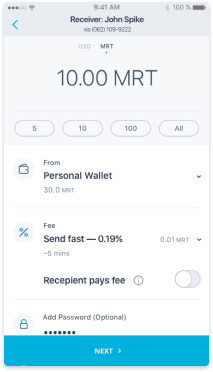 You’ve probably read or heard about cryptocurrency in the news. Maybe your techie friend owns some Bitcoin. But you likely don’t own any digital currencies or let alone know how to obtain them in the first place.

Merit is on a mission to change that.

Wali helped come up with the idea for Merit after he and his co-founder Maxim Khailo wondered why so few people — even those within the tech industry — actually own cryptocurrency. They concluded that it was a problem around usability and accessibility.

Simplicity, safety, and community are the pillars of Merit — the third of which is perhaps most important, Wali said. Part of what makes Merit different from other cryptocurrencies, and what helps build community, is the invite-only requirement to obtain and own MRT.

Wali explained that the anonymity associated with many existing cryptocurrencies enables hacking and theft too easily. He said Merit enables an “active stewardship model” and can track, across its blockchain, who is bringing in who to the community.

Merit also changes the fundamentals of mining, or the process by which cryptocurrency is made via powerful computers. The company has created what Wali calls “proof of growth mining.” Since the service is invite-only, Merit can better assess and control who is rewarded with MRT.

“What that enables is folks can actually mine merit without a computer,” Wali said.

Another differentiator is how Merit allows its currency to be exchanged between owners. Rather than exchanging long 34-character public key strings, Merit built its own protocol.

“We created an escrow on the blockchain that can hold money for you to claim it,” he said.

MRT can be created and sent via SMS, Twitter, or various other communication tools. Merit also features decentralized vaults, password-protected transactions, and cancelable transactions. It is launching today without an ICO, as Wali said the company wants the community to determine price.

Wali, who sold his most recent startup Fox Commerce to a blockchain commerce company, said his 10-person team is focused on making Merit accessible to just about anyone, regardless of technical knowledge. That feeds into the company’s vision of getting more people owning and using cryptocurrency.

“Any currency is only as useful as the number of people who use it. If you can’t transact with it, what’s the point?” he said. “If we have dramatically less than a percent of the world’s population using crypto, it’s a really big problem when you think about the viability of the space at large.”

Merit is bootstrapped, with the founders investing an initial $1 million in the company. The business model is split between Merit Labs and a non-profit called the Merit Foundation. A percentage of all MRT distributed goes into a genesis block, which is allocated across the foundation.

“The idea of Merit is that with a decentralized launch and a longer-term approach, we are incentivized to make Merit valuable everyday,” Wali said. “With both the non-profit and for-profit, we’ll sell a little bit of Merit over time to continue operations in the organization. As the value of the currency goes up, then we’re able to do that more.”

Cryptocurrency remains a hot — yet still relatively misunderstood — area of the startup world. According to PitchBook, 179 venture capital investors in the U.S. participated in at least one crypto startup deal in the past two years. CB Insights noted this week that top VC firms Andreessen Horowitz and Union Square Ventures “are increasingly investing in public blockchains and cryptoassets broadly.”

The New York Times this week reported that the parent company of the New York Stock Exchange is working on an online trading platform for Bitcoin. That followed news of Goldman Sachs’ plan to open a Bitcoin trading unit.

Some are still skeptical. Speaking on CBS this week, Bill Gates called Bitcoin and ICOs “one of the crazier speculative things.”

“As an asset class, you’re not producing anything and so you shouldn’t expect it to go up. It’s kind of a pure ‘greater fool theory’ type investment,” Gates said. “I agree I would short it if there was an easy way to do it.” Gates previously weighed in on the subject during a Reddit AMA in which he called cryptocurrencies “super risky.”

Merit is one of several cryptocurrency/blockchain-related companies and organizations sprouting up in the Seattle area. There are startups like Unikrn and Strix Leviathan; a blockchain consulting group called New Alchemy; and an investment group called Reflective Venture Partners that launched a new Seattle-based venture fund with blockchain company RChain Cooperative to invest a cryptocurrency equivalent of more than $190 million in blockchain apps and startups.

“There is just phenomenally great talent here,” said Wali, who re-located to Seattle in 2016. “We have the ability to be one of the epicenters of cryptocurrency.”