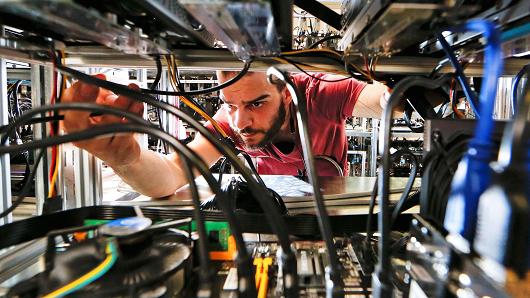 The cryptocurrency industry is getting so hot that dedicated career services are popping up.

On Thursday, CoinDesk, a leading source of cryptocurrency news and organizer of major industry conferences, launched an online “Career Center” with job listings.

It’s “no secret demand for blockchain skills is high and that finding talent is a real difficulty,” Jacob Donnelly, director of marketing, said in a statement. CoinDesk is also hosting a career fair along with its Consensus conference in New York this month.

Listings of “blockchain” skills skyrocketed more than 6,000 percent in the first quarter from a year ago, online freelancing database Upwork said in a report Tuesday. That’s far and away the hottest skill on Upwork, and a slight change from the fourth quarter when “bitcoin” was the fastest-growing skill and blockchain wasn’t even on the list.

“There’s an explosion of activity around cryptocurrencies because of that extremely volatile, but extremely exciting, nature of bitcoin. There’s a lot of millionaires made overnight and drawn a lot of people in,” said Andy Challenger, vice president at placement firm Challenger, Gray and Christmas. “There’s sort of a gold rush mentality.”

Bitcoin grabbed public attention last year when the price of one coin shot up more than 2,000 percent in 12 months to above $19,000. The cryptocurrency was the first application of blockchain technology, which eliminates the need for a third-party intermediary, such as a bank, by quickly creating a permanent, secure record of transactions between two parties. Now, start-ups and corporations alike are testing ways to use blockchain in a host of areas such as energy distribution and supply chain management.

Last year, IBM, Microsoft and Accenture accounted for roughly half of $700 million in global revenues related to blockchain, according to Oppenheimer analysts Shaul Eyal and Tanner Hoban. They noted estimates that the size of the blockchain industry could grow into the tens of billions.

“As the technology matures, we think those blockchain engineers will see absolutely high demand,” Eyal said in a phone interview. “Right now it’s a little bit of a wild, Wild West with many entrepreneurs trying to jockey for position.”

Some analysts say taking the risk in a cryptocurrency role could position someone for a key role in a major corporation down the road.

“If you enter the crypto start-up space and gain some experience in the underlying blockchain technology, it will serve you really well,” Challenger said. “It’s an industry that requires a certain amount of expertise, and that’s a rare commodity.”

The cryptocurrency industry is still small — the total market capitalization of all cryptocurrencies to date is about the size of one typical S&P 500 company, according to CoinMarketCap. And as with any nascent trend, the risks are high.

Sometimes a start-up has a good idea, brings people to work on a prototype, but doesn’t get funding, said David Gadd, director at tech recruiting firm Proxime Solutions. So the company has to close down.

Still, the Canada-based recruiter said many people are coming out of government and insurance companies to work in blockchain and many financial institutions are also building up their own blockchain teams. Although “no one wants to be seen as the first company to come out with a blockchain project, they have a team ready to go sitting on the bench,” Gadd said.