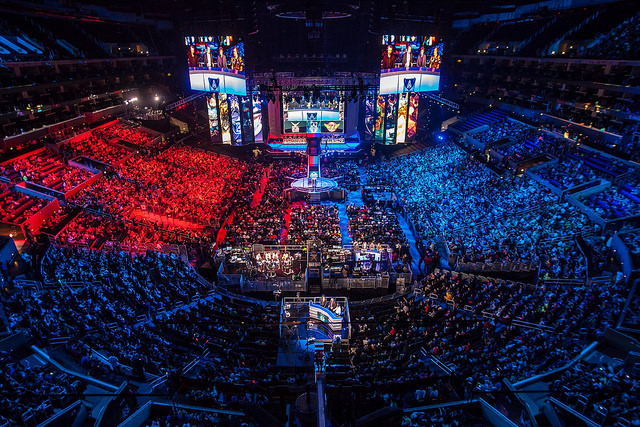 The gaming industry is one that is forever evolving. The progress we can see from the original gaming formats around 30 years ago is staggering, and blockchain technology may well be what drives even further growth in the coming months and years. As an industry, gaming and eSports can typically adopt new technologies far quicker than say financial or logistics industries – so aspects of blockchain technology can be expected in eSports very soon. This is due, in part, to the age of the eSports audience which is typically very young, and therefore tech-savvy.

Major eSports events now attract more viewers and fans than traditional sporting events, and around $4.6BN was generated last year by gaming content on live and on-demand video services. By 2019, the eSports audience is expected to grow to around 330,000,000 people. The audience is very clearly there – the trick is creating the best possible system to tie everyone together. The solution is blockchain technology, which – like in so many other industries – is set to revolutionize the way eSports platforms function. It will transfer the power back into the hands of the participants, whether they are organizing an eSports event, using their own equipment to stream one, or if they are simply a viewer who wants to watch an eSports competition unfold. Participants will be able to directly interact with each other, whilst the transfer of funds can be done in an automatic, seamless way.

In fact, a re-occurring theme in relation to the use of blockchain technology is the way it hands power back into the hands of the users. Via blockchain and the use of smart contracts – eSports enthusiasts will be able to interact and exchange digital currencies in a secure and transparent way. All exchanges will be logged in a process that guarantees transactions are valid and accurate, for everyone to see. The fact this is done absent of an intermediary body regulating the exchange means such processes can now be done without any cost to the users.

As well as the $100Ms of donations that viewers currently send to streamers on a yearly basis – there is a list of ways participants in an eSports ecosystem are able to make money. Whether it’s via advertising, subscriptions, betting, crowdfunding, or rewards distributed for certain activities – all of these transactions can be streamlined and processed in a secure and transparent way, thanks to blockchain technology.

A key area blockchain is set to impact the eSports arena is the streamlined way it facilitates betting. Betting is an extremely popular byproduct of eSports tournaments and accounts for a good deal of income in the space. Blockchain technology creates a trustless, secure ecosystem for low fee betting outside the control of a central party. This opens up the possibility of gambling to a whole new audience – as any who were once hesitant or fearful of getting involved, can now do so with their mind at ease. The use of the tech also makes it so much harder for those looking to fix match results to away with it, due to the way it logs and remembers every transaction of all participants across the network.

As well as this, the sale of gamer-earned goods is a huge source of contention in the gaming industry, with payment often being forged and people sometimes being conned out of their hard-earned reward. Use of blockchain technology can certainly be employed here, to increase trust and reliability when it comes to making money out of the time and effort spent playing a game. Blockchain makes payments just like these simplified and thus creates a genuine and secure means of income for gaming enthusiasts.

The use of cryptocurrency is a concept that is not new to avid gamers. Whereas many people take time to understand and trust a form of payment that isn’t a physical, tangible object – gamers having been adapting to digital payments for years. Virtual money has played a huge role in games such as World of Warcraft, from as long as ten years ago – where huge sums of real money was exchanged in return for the in-game currency, to buy items within the game that would otherwise take hours and hours of gaming time to earn.

However, the appeal of earning from expertise is not the only reason why we should embrace blockchain technology, or why it is the future of the industry. One of the biggest attractions of this technology is the level of transparency it can offer. All parties involved within the decentralized cloud gaming ecosystem are able to see the movements of their cryptocurrency and a decentralized gaming platform, such as Play2Live, will depend on the exchange and investment of cryptocurrency – such as the Play2Live Token (LUC). By utilizing blockchain technology, owners of the token are able to exchange and trade worry-free.

Having said all of this, the true extent of the impact blockchain technology is likely to have on the eSports industry is yet to be fully revealed – we are really just scratching the surface. The speed with which companies are able to scale, the removal of intermediaries, the transparency and trust that goes hand in hand with blockchain – these are just a few early examples this technology can bring to an already booming industry. Blockchain is the perfect technology for handing the power back into the hands of the users, those who are responsible for the existing success of the industry in the first instance.

Whilst some solutions are closer to completion than others, blockchain is ready and waiting to completely transform the eSports industry, creating a more transparent and effective industry. Gamers are such a passionate group of people, who feel strongly about the industry – a decentralized setup incorporating the many benefits of blockchain will hand the power back into the hands of gamers themselves, creating a democratized platform for all.