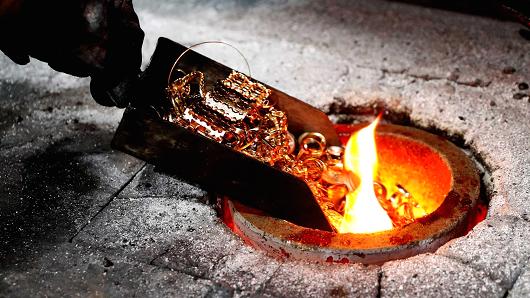 For centuries, gold has held a unique role: as a form of currency, a store of value and sometimes a speculative or alternative asset to stocks and bonds. No other asset has managed to retain such an allure over time.

And over the centuries, there have been other pretenders for gold’s throne (salt, florins or ducats, anyone?) but none has survived. The latest potential competitor for gold may be bitcoin, the cryptocurrency created in 2009 as open-source software for a decentralized form of payment.

Last year, when bitcoin prices rose from their 2017 starting value of just under $1,000 to over $19,000 by mid-December, market chatter was that bitcoin was usurping gold’s role as a store of value and alternative to fiat currencies. After all, bitcoin’s price was skyrocketing, while gold was languishing, staying mostly in the $1,200 an ounce range, despite rising geopolitical worries.

That price charts showed a near-inverse relationship between the two — especially starting in the fall — likely added to the speculation that bitcoin was sapping demand from the yellow metal.

The fever surrounding bitcoin has died down — that happens when the price of an asset falls by more than half in a short time period. But questions remain: Is bitcoin a competitor to gold? And what’s the outlook for the precious metal?

Pete Thomas, senior vice president of Zaner Precious Metals, a physical markets broker, said during last year’s bitcoin price run-up, some of his regular customers who buy gold coins or bars on a monthly basis told him they were opting to buy bitcoin at the time instead. He also heard anecdotally from other precious metals coin brokers that they were seeing bitcoin syphoning demand from gold.

He said one of his firm’s long-time clients, a major global coin dealer, told Thomas he saw demand shifting.

“He told us that 20 percent of his business was now crypto,” Thomas said. “People were going to a gold broker and swapping crypto out or swapping gold to buy crypto with him. He’s a real numbers guy and really reliable.”

Will Rhind, founder and chief executive officer of GraniteShares, issuer of the GraniteShares Gold Trust (BAR), a physical gold ETF, said when bitcoin prices were higher, it may have reduced marginal demand for gold, but he doesn’t believe that bitcoin is a “zero-sum game” for gold.

“Certainly there are people who invest or buy both of them, but there’s not a big market share differential between the two,” he noted.

Yet Joe Foster, portfolio manager and strategist for the gold and precious metals strategy at VanEck, which offers the VanEck Vectors Gold Miner ETF (GDX) and the VanEck Vectors Junior Gold Miners ETF (GDXJ), disagreed that investors were substituting bitcoin for gold, saying he never saw any hard evidence that was happening.

“There was no trading data cited. I never even saw an interview of anybody saying that I sold my gold to buy bitcoin,” he said. “To me, it was all just rampant speculation that because bitcoin is going up and gold has more or less been trending sideways, people must be going out of gold and buying bitcoin.”

Foster said there were other reasons why gold languished last year, most notably a rallying stock market.

David Morgan, editor of The Morgan Report, a resource investor newsletter, concurred with Foster. He says from what he saw, silver investors were more likely to want to swap bitcoin for silver than gold investors were. People who trade silver have a higher risk-to-reward profile, Morgan said, adding, “many of them are not as sophisticated as gold investors; they’re looking to get rich quick.”

The World Gold Council, the trade group representing the gold industry, said in its fourth-quarter Gold Demand Trends report that the yellow metal’s global, full-year demand fell by 7 percent last year. ETF demand in 2017 was one-third of 2016’s pace, although 2016 was the second-highest year on record.

Rhind and Thomas say the people who were interested in bitcoin were drawn to the parabolic price rise, rather than viewing it as having the same risk management role in their portfolio as gold does.

“Almost to the person, they all thought bitcoin was exploding, and they didn’t want to miss ‘the move’ … no one ever mentioned safety to me,” Thomas said.

If investors see similarities between bitcoin and gold, those likely come from the supply viewpoint. The amount of bitcoin is engineered to eventually decline, while gold’s production rate is low. WGC said approximately 3,200 metric tons of gold annually are mined, on average, adding about 1.7 percent to the total stock of gold ever mined.

Morgan said of the gold investors who advocate for bitcoin as a competitor to gold that many point to the cryptocurrency’s status as a decentralized, anonymous currency.

Foster said the rationale of bitcoin being a competitor to gold doesn’t make sense.

“For centuries, gold has been a safe haven store of wealth. In today’s economy, gold is used as a hedge against systemic financial risk,” he said. “And I don’t see how anybody in their right mind would think bitcoin is any kind of a hedge against financial risk given the volatility, given the fact it’s got a very short history.”

Bitcoin isn’t seen as a store of value by many, Morgan says. When he was a panelist at a resource investment conference last year, the moderator asked panelists where they would invest money they needed in 10 years. All of them, including Morgan, opted for gold over bitcoin.

Foster said the gold market “has been rather dead lately,” noting the strength in equities and the lack of concern about financial-market risk diluting the need for gold as a safe haven. Geopolitical risk is helping to keep a floor under gold prices around $1,300/ounce.

He thinks gold’s building a base following its bear market that ended in 2015. If the U.S. is in the midst of a late economic cycle—which he says he believes is happening — over the next 12 to 18 months, the stock market could correct, and there may be economic weakness to bring the next recession.

If that’s the case, then “gold is sort of like a market just waiting for a catalyst,” Foster said.

Rhind says all commodities are starting to see a pickup in demand because of the coordinated global growth and a weaker dollar, which is supportive to gold. If there are fears about a stock market sell-off, that could also push buyers into gold for a safe haven.

Rising inflation could help gold, and there’ve been small signs inflation may be picking up after being moribund for years. However, Foster says the yellow metal won’t react to rising prices until it looks like inflation is getting out of control, “but we’re not in that kind of environment; at least, not yet.”