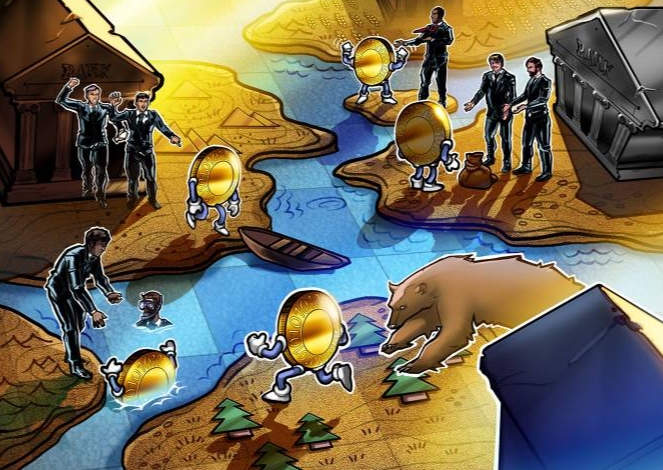 Bitcoin captured global curiosity when its’ value skyrocketed in 2017. Yet, financial institutions have been slow to add operational value to the crypto market.

The common denominator among places where governments and banks have restrained digital markets is the lack of transparency and control they have in exchanges. Many research initiatives launched by global fintech leaders remain in developmental stages, while government officials and financial actors grapple with the learning curve of the new technology.

The two biggest crypto concerns of global banks are debt liability from customers who have no protection from market volatility; and security risks associated with unregulated exchanges, such as terrorism funding, scam operations, money laundering and other financial crimes.

Market observers attribute the severe fluctuations in market price to the haphazard restrictions that ill-equipped governing bodies have placed on virtual transactions. Governments and banking executives have leveraged Anti-Money Laundering (AML) laws and “Know Your Customer” (KYC) requirements, among other existing regulations, in order to gain more control and transparency in transactions since the disruption of cryptocurrency in financial markets.

Contrary to restricting crypto exchanges, financial institutions have embraced the revolutionary potential of Blockchain. Over 90 central banks across the globe are engaging in research and development of the technology. Various platforms have been co-opted by banks in an effort to make operations more secure and efficient. Blockchain networks could eliminate high structural costs of financial services, provide a shared ledger that minimizes risk for banks, and strengthen regulatory reporting of banking activity.

Tax authorities, securities and exchange agencies, creditors, and national governments all have a stake in the unregulated crypto market, whether voluntarily or not. In response, leaders from every sector have made a concerted effort to address the new industry, and have promised forward-looking, well-informed strategies to develop regulations as the market evolves.

The role of financial institutions in the tech marketplace is still undetermined, but examining the evolutionary relationship between the two can give an idea of what to expect for the future of banking and fintech.

The list below is based on thorough news research, but in no way can be considered as complete.

The Chinese government has cracked down on crypto activity and suggested banks suspend services to clients using the currency.  Fiat-exchanges and ICOs were banned last September as authorities continue with a strict and critical approach to crypto dealings.

The governor of the People’s Bank of China voiced criticism of virtual currency in a recent press conference where he announced regulators would apply more scrutiny to crypto exchanges out of concern that market speculation will threaten the stability of domestic markets.

However, some high-ranking Chinese authorities acclaim Blockchain technology and have floated the idea of establishing state-controlled asset trading platforms, but may still exclude cryptocurrencies. Over 225 Blockchain patents were filed in China in 2017, the most in comparison to any other country.

Other tech innovators are not fazed by the intense regulatory obstacles in China and in some places have received funding from local governments for Blockchain initiatives.  The Chinese government launched the Blockchain Industrial Park in Hangzhou, which may spend upward of $2 billion on Blockchain projects, 30% of which is expected to be funded by the government.

The Japanese crypto industry is the biggest in the world, according to a report from the Japanese Cryptocurrency Business Association. The report reveals there are over 3.5 million active crypto participants in the country and trading volume of Bitcoin hit $97 million in 2017.

The Japanese government passed legislation in April 2017 that requires exchange operators to report cryptocurrency transactions in an effort to ensure banks are in compliance with AML regulations. The crypto community is more cooperative with the government after one of the worlds largest crypto hacks was orchestrated in January on Japanese-based exchange platform, Coincheck.

The fourth largest bank in the world, Mitsubishi UFJ Financial Group, has since announced plans to issue its own cryptocurrency to provide secure exchanges and stabilize market fluctuations in Japan.

In early April, a government-backed research group proposed guidelines and regulations to legalize ICOs. The guidelines have potential to become law in a few years’ time—a notable position, given that Chinese and South Korean governments banned ICOs completely. The proposal recognizes ICOs as securities, similar to the SEC’s approach in the U.S.

Other developments in the crypto market of Japan include the bank Consortium’s recent release of a domestic payments mobile app powered by Ripple technology. The creators of Ripple also partnered with the Saudi Arabian Monetary Authority and Western Union to use the system for payment and settlement transactions between customers.

Similar to China’s approach, ICOs were criminalized in late 2017, but the Korean government may adapt investor protection policies similar to the U.S. SEC for ICOs to be allowed in the future.

However, South Korea is among the most progressive countries in regard to crypto policies, which are seen as efforts to protect the industry. The South Korean Ministry of Strategy and Finance recently announced it would release tax framework by June.

The government banned officials from owning or trading cryptocurrencies in March out of concern for insider trading and corruption. Since the government has applied more scrutiny to exchanges, two senior executives from an unnamed crypto exchange were charged with embezzlement and fraud.

The Korean Blockchain association, which was officially established in June 2017, is a self-regulatory group comprised of 33 crypto exchanges. The association’s mission for self-regulation came after many exchanges had difficulties complying with various rules the Korean government outlined in January.

The Securities and Futures Commission in Hong Kong warned various crypto platforms in February that exchanges and ICOs will be subject to stricter scrutiny.

Financial regulators in Hong Kong take a more lenient approach to policing the crypto market in comparison to their Chinese counterpart. However, the severe influx of crypto-investors to Hong Kong after China banned fiat exchanges last year presents uncertainty to how Hong Kong will address intense demand from Chinese businesses.

Certain ICOs may qualify as Collective Investment Schemes (CIS) by the SFC in Hong Kong and must be vetted and registered before accepting investors. Similar to the U.S. SEC, ICOs are considered securities and must comply with established securities laws.

Meanwhile, Hong Kong and Singapore established a Blockchain alliance which nearly 20 banks have joined. The trade network between the two competing crypto-hubs will make transfers of currency and documentation more efficient.

The Singapore Fintech Association and the Fintech Association of Japan announced plans to collaborate and “bridge the gap” between the countries’ booming crypto industries, before the director of the Monetary Authority of Singapore reaffirmed commitment to ‘Project Ubin’ in March, a Blockchain network used for international payments.

Cryptocurrency transactions are largely unregulated in Singapore, but the central bank reported in March that they are assessing the market to determine if investor protections are necessary.

The central bank maintains a complaisant environment for Blockchain tech development but warns investors of the risk associated with volatile cryptocurrencies from market speculation. Further, financial authorities considered plans for more regulation out of fear that issues with cryptocurrency may undermine Blockchain acceptance.

‘Project Ubin’ first partnered with R3 in 2016 to experiment with potential alternatives for financial operations using distribute ledger technology. China and Singapore have since successfully carried out the first commodity trade of gasoline using a Blockchain system.

The call for more regulation mirrors the trend of other Asian countries’ financial authorities who have recently reconsidered regulatory policies for the volatile market.

Similar to Singapore, Taiwanese financial authorities are open to experimentation with Blockchain tech for internal uses. The central bank plans to incorporate the technology with services in the capital city, Taipei, to create a ‘smart city.’

In contrast with China’s strict ban on crypto activity, Taiwan allows exchanges and ICOs. But the Central Bank of China recommended that Taiwan warns investors of potential risks and monitor exchanges for compliance with AML laws.

Thailand’s Finance Ministry plans to collect a 15 percent capital gain tax on cryptocurrency profits, which was proposed in early March.

The legislation addresses guidelines for transactions and ICOs and will require crypto operators to register with financial authorities. But the government does not plan to further restrict or ban the crypto industry in Thailand.

India’s largest private bank, HDFC, banned the purchase of cryptocurrency via debit or credit card in order to “protect customers” from market fluctuations in March.

India’s finance minister announced the country does not recognize Bitcoin as a legal tender and licensed crypto entities will be penalized if they continue to operate. India is one of the top global tech leaders, but there is a little understanding of the crypto market in the country — although people have taken an interest in the underlying Blockchain technology.

The ban sparked controversy within the domestic crypto industry that fears the strict regulation will cause “brain drain” and underdevelopment of Blockchain tech in the country.

In contrast to the strict ban on operations, The Reserve Bank of India announced plans to experiment with its own digital currency on April 5, after meeting with the Monetary Policy Authority.

Crypto exchanges in Malaysia are now required to identify traders after the government enacted AML legislation in February. Regulators emphasized the need to restrict the criminal use of the virtual marketplace.

Domestic banks in Malaysia have partnered to experiment with scalable uses of Blockchain tech. Malaysia has one of the most progressive plans for regulation of Blockchain and virtual currency and has already enacted legislation which sets standards for virtual exchanges. 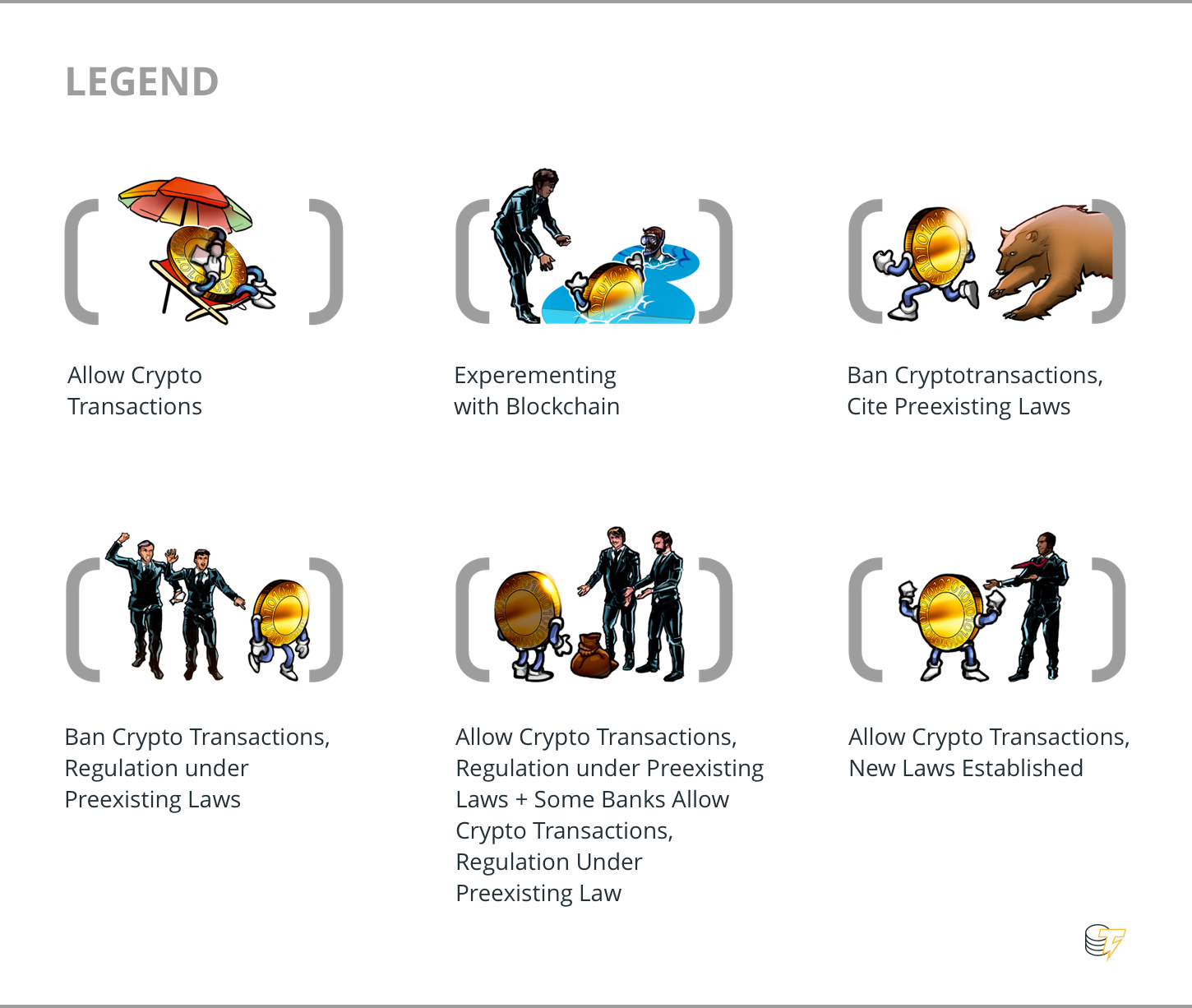