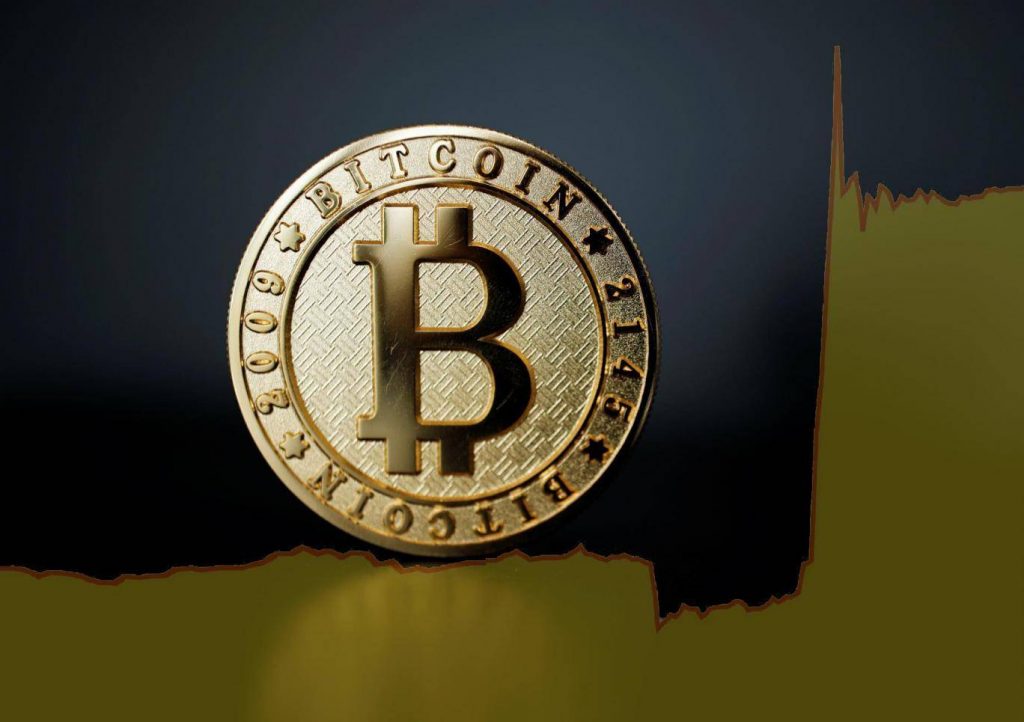 Bitcoin is notoriously volatile. Since its inception in 2009, the cryptocurrency has experienced staggering price rises and vertical freefalls that often defy explanation – with some analysts deferring to a 2013 meme describing it as “magic internet money.”

But even with this spiky history, bitcoin’s sudden price surge on 12 April was unprecedented. In less than 60 minutes, bitcoin’s value shot up by more than $1,000, driven by the biggest one hour trade volume in history of over a billion dollars worth of bitcoin.

The rocketing price, which took bitcoin above $8,000 for the first time since March, was even more surprising given that the digital currency had been steadily sliding down in value since hitting a peak close to $20,000 in late 2017.

Significant market movements can sometimes be attributed to positive or negative news in the cryptocurrency space, however experts have been hesitant to attribute the most recent gains to anything specific.

“Over the past two years, bitcoin has exhibited significant volatility,” bitcoin expert David Shrier told The Independent. “It’s important to remember that it is a highly speculative asset and a handful of actors have the ability to significantly impact the price.”

Mr Shrier, a co-convener of Oxford Saïd Business School’s Fintech course run education technology leader Get Smarter, points to the power that just a handful of traders hold over the market. The huge holdings that these traders have lead to a disproportionate market impact.

This is a view shared by Olga Feldmeier, CEO of blockchain startup Smart Valor, who suggests the rapid rise could be the result of a single actor.

“I personally think that this rise was due to a large institutional investor,” Ms Feldmeier told The Independent. “Apart from [renowned currency trader] George Soros, there are a lot of institutions, hedge funds and big investors waiting for the right time to step in.

“As the price increase happened on crossing the $7,000 line, and came initially from just one exchange – Bitfinex – this indicated that it was pulled by a large institutional purchase order. Later it spread to other exchanges and marketplaces.”

Another factor to take into consideration when understanding bitcoin’s price movements are the so-called ‘hodlers’. This investor term – unique to cryptocurrency – refers to people who prefer to hold onto their bitcoin rather than sell them.

This means that no matter how low the price of the cryptocurrency goes, there is never likely to be a wholesale sell-off from all investors.

“Bitcoin was born of the 2008 financial crisis, and a lot of people who jumped into it and got big positions early are mistrustful of the conventional financial system,” Mr Shrier said.

“Bitcoin probably benefits from a perception of being a decorrelated asset, meaning that as other securities like the US dollar or the stock market might fluctuate in concert with recent events, we might see periodic ‘flights to decorrelation’ – which will become more exacerbated as more institutional capital begins trading in bitcoin.”

All of this unpredictability means it is difficult to predict whether these dramatic gains signify an upturn in bitcoin’s recent misfortune. While some will be cautious of investing in something that is volatile by nature, others believe that the highs of 2017 will look tiny compared to bitcoin’s future price point.

Proponents of the cryptocurrency say that it is the underlying technology that will eventually see bitcoin’s true potential realised. Rather than just being simply a store of value or a speculative asset, bitcoin could one day be used as a legitimate currency alongside the US dollar or euro.

Twitter CEO Jack Dorsey, who is also an investor in a bitcoin startup, recently claimed that the cryptocurrency would one day become the world’s “single currency” within the next decade.

If this should happen – which some say is technically impossible due to bitcoin’s slow and inefficient transaction times – then a single bitcoin could feasibly trade for millions of dollars.

This is something hypothesized by Michael Jackson, a partner at leading venture firm Mangrove Capital Partners and the former COO of Skype. Like Mr Dorsey, Mr Jackson sees bitcoin’s inherent value as both an investment security and a payment mechanism.

Should bitcoin reach even a fraction of the worth of other major money supplies like the US dollar, Mr Jackson believes bitcoin could be worth “100-times what it is today.” It will just need a few more days like today.