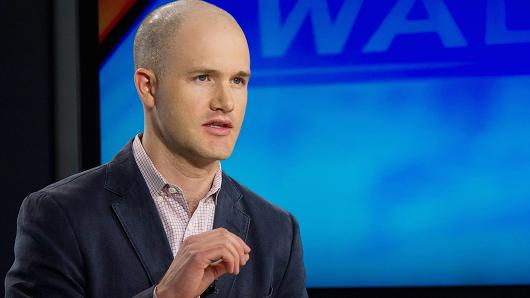 Coinbase, the leading U.S. marketplace for cryptocurrencies, is working on ways to expand its business as it tries to stay ahead of the competition.

The San Francisco-based company has made a series of announcements that pave the way towards supporting new crypto-assets, while reportedly stepping up its efforts to work with regulators.

In doing so, the nearly six-year-old company may help address whether certain digital assets are securities and find a way to legally trade those products.

“It seems like they’re laying the groundwork for supporting tokens from [the technical] side and from a regulatory standpoint as well,” said Scott Suh, research associate at Canaccord Genuity.

The start-up met with Securities and Exchange Commission officials in recent weeks to discuss registering as a licensed brokerage and electronic-trading venue, The Wall Street Journal reported Friday, citing sources familiar with the situation.

A source familiar with the situation confirmed to CNBC that the cryptocurrency company is in talks with the agency about registering its business. Coinbase declined to comment.

Having a brokerage license could make it easier for Coinbase to support more coins while complying with securities regulation, some analysts said.

“In order to trade securities, they need to be a broker-dealer,” said Jerry Brito, executive director at Coin Center, a digital currency advocacy group based in Washington, D.C. “I could imagine [Coinbase] could sell a number of other tokens” with the license.

Meanwhile, the San Francisco-based company is building up its technical ability to handle new cryptocurrencies, many of which the SEC will likely consider securities.

On Thursday, Coinbase said it intended in coming months to allow customers to withdraw offshoots of bitcoin, the largest cryptocurrency by market capitalization. The news followed an announcement the prior week that the company plans to support the Ethereum ERC20 technical standard, which is used by many tokens launched through the popular initial coin offering process.

In both cases, Coinbase said it is not adding specific assets to the platform at this time.

The company is widely considered the most legally compliant in the industry and under current conditions has chose to only list four coins: bitcoin, bitcoin cash, ethereum and litecoin. That has caused many retail investors to quickly move on to other exchanges that offer far more cryptocurrencies, said Michael Graham, senior equity analyst at Canaccord Genuity.

“Coinbase sees that happening and they want to capture some of that market,” he said.

Other cryptocurrency exchanges are pursuing different strategies to stay on the right side of U.S. regulators. For example, Bittrex has said its assessment of more than 190 tokens available on its platform determined they are not securities.

Overstock.com says it has a license for an “alternative trading system” through an acquisition, and its subsidiary tZero revealed Monday a demo video of its forthcoming digital assets trading platform.

Coinbase is also expanding its reach into other areas of financial services.

The company announced Thursday the launch of “Coinbase Ventures,” an incubator fund for early-stage start-ups working in cryptocurrencies and blockchain. The fund already has $15 million for investments and is set to grow, Asiff Hirji, president and COO at Coinbase, said on CNBC’s “Fast Money.”

In early March, Coinbase also released a weighted index fund that will give accredited U.S. investors exposure to all the assets listed in its GDAX exchange, similar to how the Dow Jones industrial average’s 30 stocks attempt to reflect the U.S. economy.

And in mid-February, the company launched “Coinbase Commerce,” which lets merchants accept major cryptocurrencies for payment.

But the cryptocurrency giant, valued at $1.6 billion in August, has suffered its share of growing pains as users more than doubled in a year to more than 13 million at the end of November.

When Coinbase surprised markets in December with an attempt to immediately roll out trading of bitcoin cash, critics pointed out the price of the bitcoin offshoot rose into the announcement. CEO Brian Armstrong subsequently said in a Dec. 20 blogpost the company is investigating possible insider trading. No updates have yet been released.