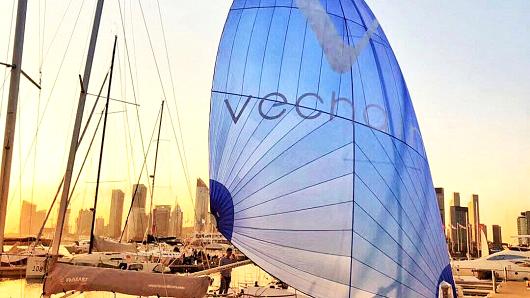 All of the top 20 cryptocurrencies by market cap are down for the year. Except for one, VeChain.

That digital currency has gained more than 28 percent since January 1, which one analyst says is thanks to big-name partnerships and a unique structure that incentivizes investors not to sell.

Prices of most cryptocurrencies have suffered this year following regulatory crackdowns and news of hacks. For the top three by market cap, bitcoin is down more than 44 percent, ethereum has fallen 40 percent, and ripple is down 74 percent this year, according to data from CoinMarketCap.

Like many digital tokens, VeChain, which trades under the symbol VEN, is tied to a larger blockchain project. The digital currency backs the actual company VeChain, which among other things, uses a mix of blockchain and a chip technology to track luxury goods and confirm that they’re not counterfeit.

The company likens VEN to “the fuel or the blood which supports VeChain’s distributed platform.”

Those corporate ties have attracted more retail investors and boosted prices, according to Derek Kim, head of research at BK Capital Management.

“They have a really good way of marketing their relationships with companies they’re developing products for,” Kim said. “The big catalyst for token price appreciation is company relationships.”

VeChain’s price structure has prevented the similar sell-off seen in other cryptocurrencies, Kim said. As part of the company’s rebranding in January, it announced a structure where those holding a certain amount of coins for a longer time get more rewards, and voting rights.

Those investors are also eligible for additional VEN coins, which act like an interest-type payoff, Kim said.

“That structure makes token holder base a bit more sticky,” BKCM’s Kim said. “They have to lock up tokens within the structure, which takes supply and selling pressure and protected them from the sell-off.”

Draper, who has also invested in Skype and Tesla, bought roughly 30,000 bitcoins in 2014, which he told CNBC in December he is still holding. At Wednesday’s prices, those are worth roughly $237 million.

The founding partner of leading venture capital firms Draper Associates and DFJ told CNBC in March this “is the most excited I’ve ever been as an investor, and I was right there at the beginning of the internet.”

In January, early Circle and Ethereum investor Jim Breyer also announced his support for the company and its founder Sunny Lu. Breyer Capital is acting in official advisory role for VeChain, the founder of Breyer Capital said in a blog post.

VeChain has fallen more than 60 percent from its all-time high of $9.43 in January, according to CoinMarketCap. The cryptocurrency was trading near $2.92, as of 2:05 p.m. ET Wednesday.