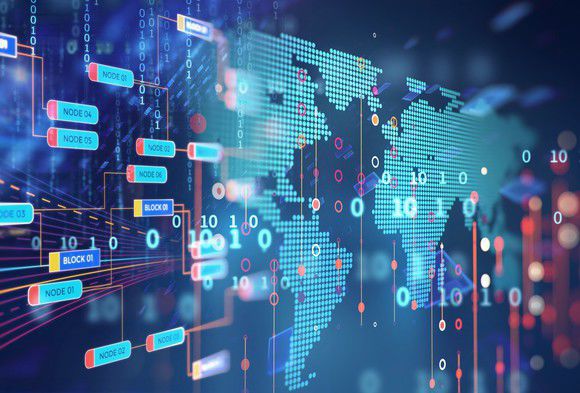 Since the beginning of 2017, the aggregate cryptocurrency market cap has vaulted from less than $18 billion to more than $300 billion, which is one heck of a return in less than 15 months.

It’s all about blockchain

At the heart of this rally is the emergence of blockchain technology. For those unfamiliar with blockchain, it refers to the digital, distributed, and decentralized ledger often underlying digital currencies that’s responsible for logging all transactions without the need for a financial intermediary (i.e., a bank).

the spotlight in 2009 when bitcoin debuted. Its evolution is expected to be a game changer for the financial services industry, which has a handful of perceived flaws, including long validation and settlement times for cross-border remittances, and higher transaction fees as a result of banks acting as third parties during transactions. Blockchain aims to correct these issues in three ways.

First, decentralization — storing data on servers and hard drives all over the world, rather than in one location — ensures that no single entity, including hackers and businesses, can gain control of a network. Secondly, it simplifies the transaction to just a sender and receiver of funds. By taking banks out of the loop, it should lower transaction costs. Finally, validation and settlement should occur a whole lot faster, especially in cross-border payments. Whereas transactions under the current system could take up to five business days to settle, they could be virtually instant with blockchain.

Yet what’s often overlooked is what blockchain can do in a noncurrency setting. Blockchain has the potential to reshape how supply chains are managed and monitored. It could be a breakthrough for retailers looking to reward customers with loyalty points. It may even be the cornerstone for decentralized IDs.

Now, blockchain will be at the forefront of protecting the rights of workers who might otherwise be unable to do so.

As announced on March 16, beverage giant Coca-Cola (NYSE: KO), which operates in all but one country worldwide (North Korea), is partnering with the U.S. State Department, Bitfury Group, Emercoin, and Blockchain Trust Accelerator to create a decentralized blockchain-based registry for workers in foreign countries to ensure that employers honor the scope of work contracts.

According to the International Labor Organization, nearly 25 million people worldwide – almost half of them being in the Asia-Pacific region – work in forced-labor conditions. Among the industries most of scrutinized for their labor conditions is food and beverage. Knowing this, Coca-Cola agreed to conduct 28 country-level studies on child labor, forced labor, and land rights for its sugar supply chains by 2020, per Reuters.

Here’s how everything looks to shake out. Coca-Cola will provide the data in more than two dozen countries via its labor force. Meanwhile, the U.S. State Department brings its experience in labor relations and protection to the table. Both Bitfury Group and Emercoin will be responsible for various aspects of building the blockchain technology that’ll log workers and their contracts into the registry. Lastly, the nonprofit Blockchain Trust Accelerator will use this opportunity to further the use of blockchain for social good.

What makes the whole system gel is the use of smart contracts, which were first made popular by the Ethereum network. Smart contracts are protocols that help with the verification, facilitation, or enforcement of a contract. In plainer English, and to be specific to the sugar supply chain workers included in this blockchain study, these smart contracts define the scope of work, pay, and employment period for these workers. It’s believed that the transparent and immutable blockchain registry being used would compel employers to treat their laborers fairly.

Said Brent Wilton, Coca-Cola’s head of workplace rights, in an email to Reuters: “We are partnering with the pilot of this project to further increase transparency and efficiency of the verification process related to labor policies within our supply chain.”

Blockchain has limitations, too

While this project led by U.S. multinational Coca-Cola is incredibly exciting, and it demonstrates the scope of what blockchain can bring to the table, enthusiasts also have to understand that blockchain has limitations.

Perhaps the biggest issue this project could run into is that the blockchain technology that allows workers to control their identities, and ensures that the scope of their work contract is being met by their employer, would need to be accessed via computer or smartphone. Most forced labor situations involve workers who don’t have the income or adequate means to gain access to a smartphone or computer. There would, therefore, be no way for the worker to use this contract to their advantage.

Secondly, even though blockchain offers an immutable means to observe whether an employer is meeting all guidelines of a worker’s contract, it doesn’t necessarily mean the employer will follow those guidelines, as noted by Engadget. This blockchain project would coerce companies to respect work contracts, but it couldn’t force them to do so.

Lastly, there’s always the concern about scalability. In particular, blockchain has proven successful in a number of small-scale noncurrency projects. Even in this instance, Coca-Cola using blockchain in 28 country-level studies is still somewhat limited. What we don’t really understand is what’ll happen to the network and response time if any type of blockchain technology is opened up to large, real-world scenarios.