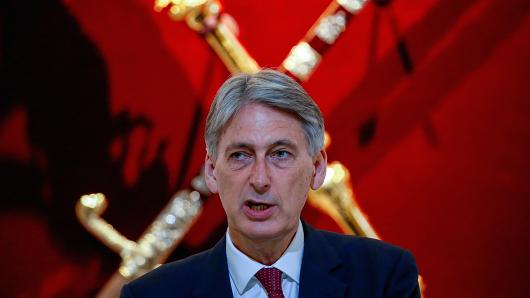 Britain has unveiled a task force that will examine both the risks and benefits of cryptocurrencies.

The U.K.’s finance department, the Treasury, announced Thursday that the task force includes Britain’s central bank, the Bank of England, and the Financial Conduct Authority watchdog.

The task force is part of a wider fintech, or financial technology, strategy laid out by Westminster. As part of its initiative, the U.K. will sign an agreement dubbed a “fintech bridge” with Australia on Thursday that will enable British fintech firms to sell products and services in Australia. The deal will also look to build cooperation on policies and regulation surrounding the sector.

“I am committed to helping the sector grow and flourish, and our ambitious sector strategy sets out how we will ensure the U.K. remains at the cutting edge of the digital revolution,” U.K. Finance Minister Philip Hammond said in a statement.

“As part of that, a new task force will help the U.K. to manage the risks around crypto assets, as well as harnessing the potential benefits of the underlying technology.”

Both Britain and Australia’s fintech industry bodies — Innovate Finance and Fintech Australia — will engage in regular summits aimed at advising the governments of both countries, the Treasury said.

The U.K. government’s strategy also aims to create financial industry-wide standards that make it easier for fintech firms to partner with banks, it said. Hammond is set to speak about the strategy at a conference organized by the Treasury in London on Thursday.

Cryptocurrencies are a contentious issue for governments due to their decentralized nature and volatility in prices. The world’s best-known cryptocurrency, bitcoin, soared to a record high close to $20,000 last year.

Bank of England Governor Mark Carney called for more regulation on the sector this month, and labeled price volatility within the space “speculative mania.” The central bank’s chief said last month that bitcoin has “pretty much failed” as a form of money.

In addition, Financial Conduct Authority Chief Executive Andrew Bailey has previously warned buyers of bitcoin to “be prepared to lose all your money.”