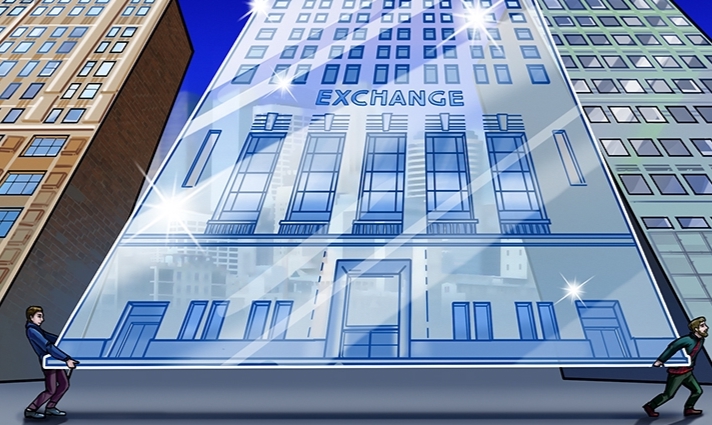 After selling $50,000 worth of a cryptocurrency, Ribes measured the rate of decline of that particular cryptocurrency on a certain exchange to measure its liquidity. Ribes implemented this method to test the liquidity of cryptocurrencies on OKEx, Bitfinex, Kraken, and GDAX.

Operated by OKCoin, formerly the largest cryptocurrency exchange in China prior to the local government’s crackdown on trading, Hong Kong-based OKEx briefly became the biggest cryptocurrency exchange internationally, as reported by Cointelegraph, overtaking Binance in March 2018. At the time of reporting, OKEx remains among the four largest trading platforms, alongside Binance, Huobi, and Bitfinex.

Bitfinex, Kraken, and GDAX are regulated cryptocurrency exchanges that allow cryptocurrency-to-fiat trading. GDAX was founded and is currently being operated by Coinbase, which has more than 20 mln users and is the most widely utilized Bitcoin wallet. Kraken is based in San Francisco, while Bitfinex is based in Hong Kong, alongside OKEx and Huobi.

According to the chart below, Kraken and GDAX, which are mostly utilized by users to process cryptocurrency-to-fiat trades, deposits, and withdrawals, recorded the smallest slippages, signaling that the two exchanges have sufficient liquidity to deal with relatively large sell-offs, in the range of $50,000 to $100,000. 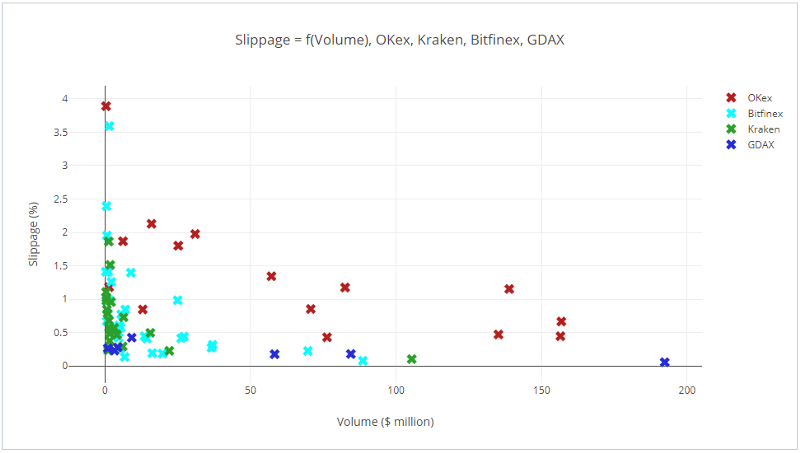 On GDAX, a sell off of $50,000 worth of a particular cryptocurrency only led to a slippage of around 0.1 percent, as seen on the blue dots on the chart above. However, $50,000 sell offs on OKEx led to massive slippages, as the value of cryptocurrencies fell and order books became unstable.

On a blog post detailing his findings, Ribes stated that the research has shown how the volumes of OKEx and other cryptocurrency-only exchanges are fabricated and inflated, given that a small amount of sell orders can manipulate the order books and prices of cryptocurrencies.

The chart is striking. It shows how, although all first three exchanges seem to behave rather similarly, OKex pairs, in red, all have a massively higher slippage with regards to their volume. Like I explained before, this can only mean that most of the volume OKex claims is completely fabricated.”

Moreover, Ribes revealed that the chart above excluded slippages of over 4 percent. The chart provided by Ribes below, which includes slippages of more than 4 percent, show the shallow order books and low liquidity of OKEx. On March 7, 2018, cryptocurrency analysts including Alistair Milne stated that the sell off of hundreds of millions of dollars in Bitcoin has led the price of the cryptocurrency to crash down to $8,300. Cointelegraph released an in-depth analysis on the matter, dissecting the impact Mt. Gox bitcoin sell-off had on the market over the past few weeks, and its continuous effect on the entire cryptocurrency market.

Despite the massive amount of Bitcoin he holds, Mt. Gox trustee Nobuaki Kobayashi dumped tens of thousands of dollars in Bitcoin in the public market, on cryptocurrency exchanges rather than over-the-counter (OTC) markets. The abrupt sell-off of nearly 32,000 Bitcoin led to a domino effect across all major cryptocurrency exchanges, and the price of Bitcoin fell as it caused panic within the public market.

Evidently, the Bitcoin market was not solely impacted by the sell off of Mt. Gox Bitcoins. It was a combination of many factors including the US government hearing on initial coin offerings (ICOs), negative mainstream media coverage about traditional finance experts criticizing the cryptocurrency market, and fear, uncertainty and doubt from Japan. The mixture of these factors alongside lack of momentum led the price of Bitcoin to decline.

Easy to distort volumes and price

Ribes further emphasized that illiquid pairs did not just include small cryptocurrencies, but trading pairs of major cryptocurrencies like NEO and IOTA which boast market caps of over $3 bln can slip by more than 10 percent merely with a sale of $50,000.

“Many pairs, albeit boasting up to $5 mln volumes, would cost you more than 10 percent in slippage, should you want to liquidate a mere $50,000 in assets. Those pairs included, at the time of the data parsing (March 6, 2018): NEO/BTC, IOTA/USD, QTUM/USD. Hardly illiquid or low-profile assets,” Ribes added.

Changpeng Zhao, the CEO at Binance, the world’s largest cryptocurrency exchange, stated that the research of Ribes is a “good in-depth analysis” of the cryptocurrency market.#

The cryptocurrency industry is still at its early stage, and digital assets remain highly volatile. Inflated and fabricated trading volumes on major cryptocurrency exchanges need to be highlighted and acknowledged, to obtain a better visualization of actual liquidity within the cryptocurrency market.