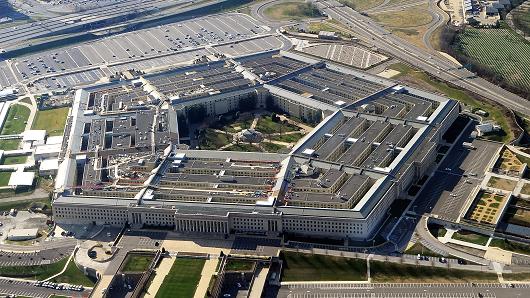 It’s hard to misplace $800 million. Yet the Pentagon recently did. The Defense Logistics Agency, which manages military construction projects, lost track of enough money to fill two tractor trailers with $20 bills, according to an internal audit that leaked in February.

The DLA is hardly the only federal organization to face bookkeeping challenges. A recent audit of USASpending.gov — a federal website created to make government spending more transparent — found that 302 federal programs failed to report $619 billion in expenditures.

Blockchain could solve these accounting problems and bring an unprecedented level of accuracy, security, and speed to federal record-keeping. By adopting it, the government could eliminate supply chain inefficiencies — and save billions of dollars.

The federal government has 2 million civilian workers spread across more than 430 agencies, sub-agencies, and departments, and conducts business with thousands of commercial vendors. Any organization that large would naturally struggle to share information and process transactions across departments in a timely, accurate manner.

Even within a single agency, data is often siloed in different databases and stored in different formats. So it’s impossible for officials to gain a comprehensive view of their spending and activities.

“This combination of security, speed, and low operational overhead makes blockchain particularly well-suited to address the public sector’s information-management challenges.”
This haphazard data storage also makes the government vulnerable to security breaches. In 2015, hackers stole sensitive information about 4 million current, former, and prospective employees from the Office of Personnel Management. Earlier this year, the Department of Homeland Security revealed a similar incident had exposed the data of nearly 250,000 agency employees.

Blockchain would enable the government to securely collect, store, process, and utilize the massive amounts of information it collects, thereby boosting cost effectiveness and transparency.

Blockchain is best known as the technology underlying cryptocurrencies like Bitcoin or Ether. But its applications go far beyond that. Essentially, blockchain is a tool for recording transactions — whether they are payments, contracts, orders, or votes — and storing that information securely on thousands of computers, via a shared ledger or large database.

While most blockchains are public, many organizations — like those in the banking sector — are adopting private blockchains to automate operations.

The underlying ledger technology can be rather intimidating. But think of it as a giant Excel spreadsheet that is visible on thousands of computers at once. People can document transactions in a cell, or “block,” of the spreadsheet. After a set amount of time, that block will be locked, and a new block — the next one in the “chain” — will be opened for editing.

Since the locked blocks are viewable on thousands of computers, it’d be nearly impossible to hack the blockchain. Altering a block on a few computers wouldn’t affect the others, which retain an accurate record of the transactions.

Blockchain ledgers also enable the creation of “smart contracts,” which can automatically process transactions or information from Party A to Party B once the locked blocks show that Party B has performed a requested service for Party A. Blockchain would preserve a transparent record of every aspect of such transactions — with full auditability and traceability.

This combination of security, speed, and low operational overhead makes blockchain particularly well-suited to address the public sector’s information-management challenges. Many governments around the world are already embracing public and private blockchain solutions.

Sweden’s government, for instance, is experimenting with blockchain to record land transactions without the need for paper documents, physical signatures, and multiple in-person interactions. The Estonian government currently uses a blockchain technology known as Keyless Signature Infrastructure to protect its sensitive public-sector data from tampering or theft.

Here in the United States, there are plenty of ways the federal government can utilize blockchain.

Agencies could use smart contracts to automate supply chain transactions with vendors or other offices — while also creating an instant, secure, and auditable record of those exchanges. They can also employ these contracts to develop, test, and deploy new software. Plus, blockchain could open the door to advancements in artificial intelligence and machine learning.

Federal organizations ranging the Centers for Disease Control to the Department of Homeland Security to the U.S. Postal Service are evaluating potential applications for the technology. And in February, the House held hearings about how blockchain could improve federal operations.

The government’s current data processing, storage and security systems are in need of help — as the Pentagon’s $800 million mishap makes clear. If the government is serious about nixing inefficiencies and finally reducing our national deficit, it’ll embrace blockchain.