Even for those investors who believe they can handle the cryptocurrency volatility, it had to be a stressful day.

On Thursday, the value of all the world’s digital coins shed more than $60 billion, as regulation looms and Google vows to ban cryptocurrency-related advertisements.

For an investor, any reaction besides panic might seem absurd. Undoubtedly, owning an asset that’s been called both a fraud and the future can be an emotionally intense experience. 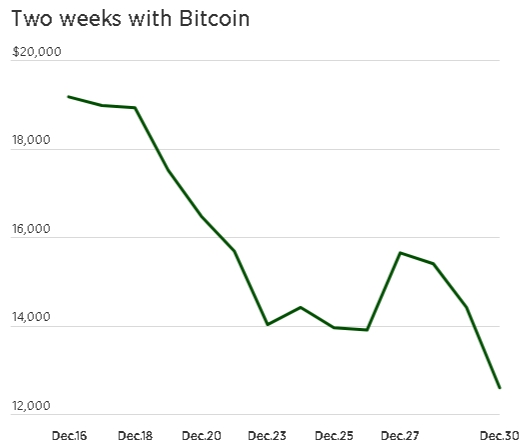 When bitcoin lost 30 percent of its value on Dec. 22, for example, one post on Reddit read: “I just re-financed my house to get in. I’m freaking out.” Another user offered support to the frantic: “If anyone’s actually depressed or suicidal, come to r/SuicideWatch. We love to listen and talk there.”

“With other speculative investments, like private equity and venture capital, you can’t check your phone every five minutes,” he said. With cryptocurrencies, “you’re able to track the minute-by-minute value of it.”

“Looking at something with such high volatility all the time is not conducive to an investor’s mental health,” Smigiel said.

Here’s how to keep calm on the cryptocurrency roller coaster:

Bitcoin’s volatility is part of what makes it irresistible, said Willemien Kets, associate professor at the University of Oxford’s Department of Economics.

“We know from social psychology that the best way to get people hooked on something is to give them a reward on a very uncertain time frame,” Kets said.

Don’t fall into the trap. Checking the value of cryptocurrencies constantly is unproductive, Kets said.

“You can’t do anything about the price movement itself,” she said.

Instead she recommends people decide on a price point at which they’ll sell — say, if the asset drops below $10,000 — and set their phone to alert them at that threshold.

Jack Tatar, co-author of “Cryptoassets: The Innovative Investor’s Guide to Bitcoin and Beyond,” pointed to another reason why constant phone checks are futile.

“It’s very hard to realize the gains you see on your phone,” Tatar said. “These markets are not as liquid as the stocks and bond market. You can check your phone and see you’re up to $30,000, but if you wan’t to realize that gain, you probably won’t be able to do that.”

That’s because it can take days for a cryptocurrency transaction to complete, during which the value can change substantially. Despite his advice, Tatar admitted he, too, can’t look away.

When people buy and sell in a dizzied cycle, they miss the bigger cryptocurrencies picture and the blockchain technology on which they are traded, said financial advisor Ric Edelman, founder and executive chairman of Edelman Financial Services.

“There’s no question that digital currencies are the future,” Edelman said. “You should be prepared to own it for years.”

Edelman acknowledged, however, that such ups and downs are intolerable for some people.

“If owning this asset is causing you to stare at the ceiling at night, you shouldn’t own it,” he said. “There’s more to life than money.”

Peter Ayton, who studies behavioral decision theory at the City University of London, said it’s hard to expect people to be rational with cryptocurrencies. Many people who’ve been seduced by bitcoin are individuals who might not fully understand what they’re buying, he said.

“When you have something as volatile as bitcoin, it doesn’t lend itself to long-term strategic thinking,” Ayton said.

Michael Sonnenshein, investments director at cryptocurrency firm Grayscale, said people might be less anxious if they’re not banking on just one cryptocurrency.

Diversifying is useful for another reason, said Edelman at Edelman Financial Services: “It’s so early, we don’t know which cryptocurrencies will survive.”

Invest only what you can afford to lose
Author Tatar said people must restrict how much of their investments go to cryptocurrencies.

“You’re seeing too many people jumping in and betting the ranch, and just saying ‘yee-haw!'” he said. “They’re not disciplined enough to realize they have to stay within their asset allocation models.”

“Re-balancing” your investments is essential with cryptocurrencies, he said, because of their tendency to rapidly change value.

You’re seeing too many people jumping in and betting the ranch, and just saying Yee-Haw!”-Jack Tatar , co-author, Cryptoassets: The Innovative Investor’s Guide to Bitcoin and Beyond

It’s not just the owners of cryptocurrencies who are stressed, said Smigiel at SEI Investments Co. Recently, he has been finding himself consoling clients who haven’t bought any bitcoin, ripples or ethereum.

“We also see anxiety on the flip-side — the people who feel they are missing out,” he said. “And so you’re anxious either way.”