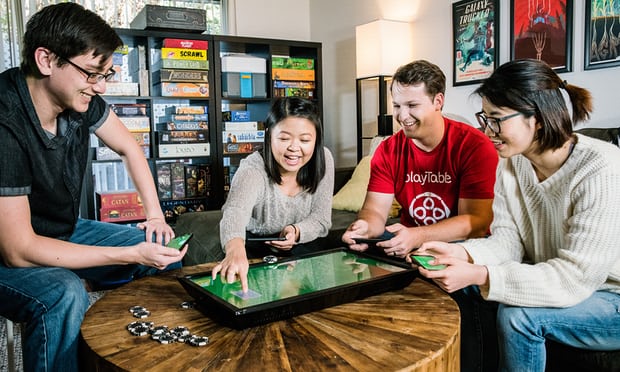 Designed to enhance the experience of playing tabletop games, the system will launch with digital versions of popular board games such as Catan, Ticket to Ride and Texas Hold ’Em, and a bespoke game called Battlegrids that illustrates how blockchain tech can change how you play.

The PlayTable is able to read information from physical game pieces or cards, and then store that information securely online – so every move you make with, for instance, your mage or warrior piece is saved and recorded. This allows individual pieces to level up and change over time, and be traded between players.

Like Activision’s Skylanders, Nintendo’s Amiibo or Lego Dimensions toy packs, PlayTable allows physical toys or pieces to be used in digital games. Theoretically, any object could be used as a game piece: PlayTable can read anything with a radio-frequency identification (RFID) sticker, so it’s possible to 3D print a piece, slap a sticker on it and use it in a game. Because information is stored in the blockchain rather than on the console or on the actual piece, you could then use it anywhere – at a competitive event, for example, or a friend’s house.

It also eliminates the need to keep track of rules for complex board games. The PlayTable will record every move, putting an end to squabbles over whether someone has slipped a hand into the Monopoly bank. Smartphones can be linked to the PlayTable to display, for instance, private poker hands.

At $599 (£429), $349 as an introductory offer, PlayTable is considerably more expensive than amassing a collection of traditional board games. The resurgent popularity of tabletop gaming, however, means that there is a large potential audience for the system.

PlayTable will launch towards the end of the year.