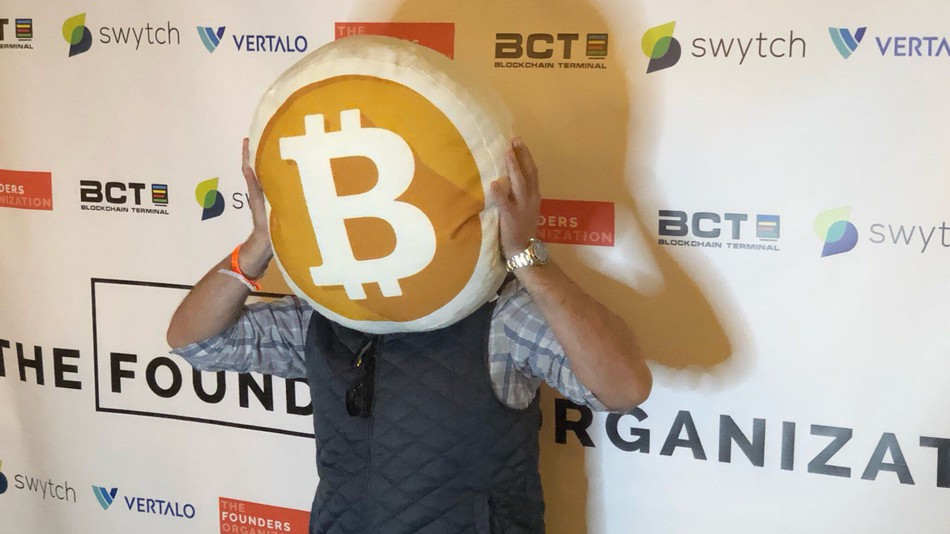 Ask any attendee of this year’s South by Southwest, and they’re bound to say they came across “a guy.” When my friend and I asked that question to entrepreneurs and investors at an Andreessen Horowitz cocktail reception on the first Saturday of SXSW, we were told to find “Kyle.” We ended up meeting “John.”

John Lin is an associate partner at Trinity Ventures. That night on the rooftop of Bob’s Steak & Chop House in Austin, his friends and colleagues around him called him an expert in blockchain. But despite their verbal and physical enthusiasm, Lin did not come off as a blind champion of the technology.

“I do think blockchain is a little bit overvalued, but long-term it will enable amazing technologies,” Lin said. “Now it’s in this new form of digital currency, but in the future, it could enable much more, like real estate and ticketing.”

SXSW of yesteryear was dominated by mobile apps. It’s where Twitter, Foursquare, and Meerkat had their viral moments. In 2018, the SXSW hype bubbled around blockchain with conversations on the best whitepapers, worst ICO scams, and cutest cryptokitties. More than ever before, blockchain-themed discussions were hosted throughout the annual conference. There were at least 38 official panels, along with side events run by software company Consensys, the Token Agency, and The Founders Organization’s Initial Taco Offering.

“At SXSW everyone comes together around tacos, so tacos and crypto seemed like the perfect combo,” Anoop Kansupada, cofounder of The Founders Organization, told Mashable.

For some attendees, blockchain at SXSW has been an opportunity to learn. For others, it’s an eye roll, filled with hot air from a community dominated by men.

Experts in the blockchain industry weren’t surprised by the technology’s dominance at the show. In 2017, we saw bitcoin and other cryptocurrencies garner mainstream attention. Blockchain-based startups have filled the inboxes of the tech press.

“People are like, ‘Yeah let’s blockchain this, blockchain that,'” said Patrick Chang, early stage venture investor at Samsung NEXT.

Samsung NEXT’s head of investment Brendon Kim added, “Today every business plan you see has some type of blockchain. Last year and two years ago, it was all about AI.”

Still, Kim’s team is paying attention to which ventures are worth their dollars and what use cases will be important. Kim has directed investments in connected devices and suggested that blockchain could play an important role in helping different machines, produced by competitive companies, speak to each other.

But conversations around connected devices and business-to-business efforts isn’t really what SXSW is known for.

“At SXSW, the vibe is more consumer focused, and I think a lot of the lower hanging fruit is on the enterprise side. Outside of SXSW, the companies that have pitched us involve around identity and blockchain and supply chain,” Chang said.

SXSW is famous for an abundance of tacos and house parties, and in 2018, blockchain was among them. Blockchain startup Consensys, led by Ethereum cofounder Joe Lubin, hosted panels and parties in a house on Rainey Street. Across from discussions on AI at Pinterest House and storytelling at Twitter House, blockchain experts and enthusiasts gathered at Consensys House to chat about smart contracts and blockchain solutions to misinformation.

Consensys House also had cryptokitties, and by that, we mean live cats: 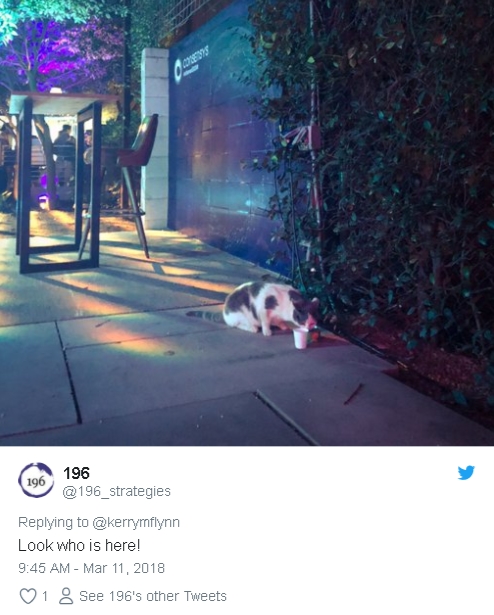 The enthusiasm around Lubin and blockchain was clear by the thousands of people who waited in line to see his official SXSW keynote on Friday. On that day, blockchain was the third most tweeted about theme in reference to speaker discussions throughout the festival, Twitter shared with Mashable.

Inside a packed theater of one of the Convention Center’s biggest ballrooms, Lubin spoke with crypto reporter Laura Shin about blockchain now and in the future

She’s far from the only female expert in blockchain. Brigid McDermott has been focused on IBM’s blockchain strategy since 2015. As VP of blockchain, she manages the tech company’s work with the technology such as work with shipping company Maersk.

“Think of [blockchain] as a trusted, shared digital layer. It doesn’t need to be 100 percent open, but there’s a continuum between trust and public submissions. We look at the potential for addressing all sorts of business transformation issues,” McDermott told Mashable.

But the blockchain industry is still very much nascent.

“If you think about back to VCRs, when Betamax made this fantastic technology, but it’s not interesting if you don’t have any content to watch. Blockchain is similar,” McDermott said.

Since blockchain is still in its early days and without any clear leaders, yet, some women in tech have taken it as an opportunity to make a significant impact.

On Monday morning, about 20 women stood in a room of the JW Marriott for the SXSW official women in blockchain meet up.

“Historically women have been ignored in the definition of systems and products. It’s important for us to be involved … using this technology for a more equitable society,” said Karen Ottoni, co-organizer of Women in Blockchain.

Ottoni and her co-organizer Nataliya Stanetsky spoke about attendees’ ability to lead.

“Blockchain isn’t male dominated because they know more about it. We all need to get involved and share our knowledge,” Stanetsky said.

Not every event looked as inclusive, however. At the Crypto Summit, hosted inside the Kimpton Hotel Van Zandt on Monday and Tuesday, women were featured in the front of the event’s informational pamphlet. And yet, their images came off as sexualized rather than empowering.

While SXSW lasts only 10 days, the problems in and the presence of blockchain aren’t going to disappear.

“You’re going to see a fluctuation in enthusiasm,” said Kim of Samsung NEXT. “This is not going to go away in the same way the social networks and the internet itself didn’t go away. You can argue if the world has become better for it or not, but there’s no arguing that it’s becoming a part of our lives.”