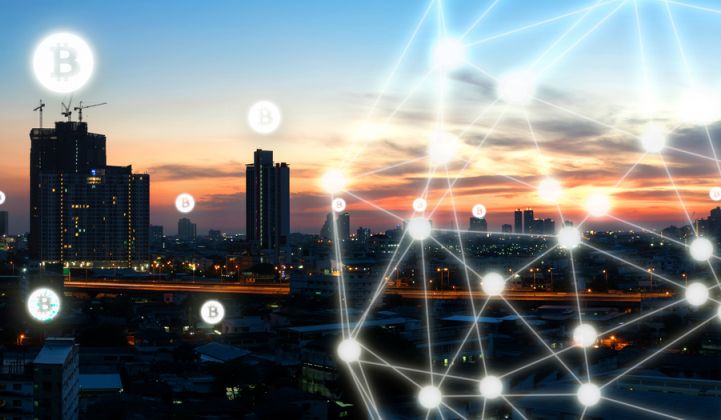 Blockchain dominated 2017. Even the energy sector couldn’t escape its grasp; it seemed that every day a new company entered the blockchain-in-energy space, raised millions via an initial coin offering, or deployed a new peer-to-peer energy trading pilot.

Veterans of the utility sector are beginning to engage with the startups in the emerging blockchain market. With deep institutional knowledge of energy regulation and legacy grid infrastructure, utilities will play a role in tapping the true potential of blockchain applications in the energy sector.

Initial coin offerings currently make up 75 percent of funding in the blockchain energy industry and will continue to be an important fundraising method in 2018.

GTM Research also expects an acceleration of utility investment via traditional venture capital as utilities continue to monitor the space and more companies complete successful pilot projects. Tepco, Innogy and Centrica have already made direct investments across five startups. They, along with other utilities such as Pacific Gas & Electric and Engie, also invested in energy blockchain consortia, such as the Energy Web Foundation, which raised $17 million in the past year.

In the U.S., blockchain-in-energy pilots have generally occurred without utility involvement. GTM Research predicts that utilities investigating blockchain technology in 2017 will begin planning and even implementing a pilot project in 2018.

Pacific Gas & Electric submitted a budget in California for Electric Program Investment Charge funding for two blockchain pilots; it currently has a job opening for a blockchain project manager to oversee the implementation of upcoming projects. Ameren has plans for a pilot with Omega Grid, a startup that went through Ameren’s accelerator program. As more U.S. utilities participate in pilots, others will follow suit.

Peer-to-peer energy trading serves as the focus of most pilots, accounting for 59 percent of planned and completed projects. However, it isn’t the most commercially viable function. Wholesale trading is finding success, demonstrated by two European pilots with dozens of industry partners.

One pilot’s leader, BTL, announced in January 2018 that it will introduce a commercial trading platform, OneOffice, that will run on blockchain. The leader of the other pilot, Ponton, said it will offer a full deployment of its wholesale trading platform in 2018.

Other startups will continue to break into wholesale trading, especially as business models begin to take shape. LO3 is testing a different approach in the wholesale market; it is conducting tests with Epex Spot in Germany to connect consumers directly to the wholesale market, enabling an early-stage decentralized energy exchange.

4. Other business models will crystallize

GTM Research expects EV charging and renewable energy credit (REC) trading will be some of the first use cases to find revenue streams.

In the case of EV charging, there is limited charging infrastructure and no accepted standard for billing, scheduling and payments software, creating less resistance to new concepts and technologies. For RECs, blockchain can replace legacy platforms and reduce the possibility of double-counting. Developers can design these REC trading platforms to conform to existing regulations.

Moving beyond 2018, blockchain in energy will have to overcome several regulatory and technological hurdles to scale. Blockchain technology itself is still maturing, leaving questions about scalability and security still to be answered. It remains unclear whether blockchain will be able to deliver on its promises to make all parts of the electricity market more efficient and secure.

On the regulatory side, existing electricity rules in large markets could hamper the ability to move from pilots with regulatory exemptions to full commercial deployments. Financial regulations could also slow the market’s development if government regulations outlaw certain types of initial coin offerings. The recent U.S. Securities and Exchange Commission’s ruling on what constitutes a security has already prevented many initial coin offerings from being allowed in the U.S. market.

As conversations about blockchain’s ability to disintermediate traditional energy players evolve, one thing is certain: Blockchain is here to stay.