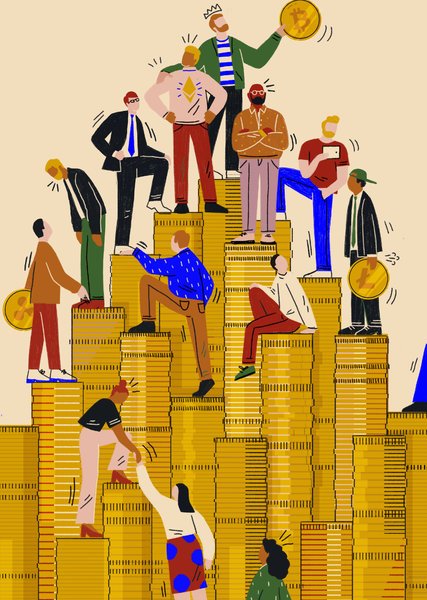 When a cryptocurrency start-up that promised to revolutionize the fruit and vegetable industry shut down last month, it left behind one word on its website: penis.

When a virtual currency company called DateCoin recently tried to entice investors for its initial coin offering, it posted a Facebook ad that featured a reclining woman in a swimsuit with text over her body that read, “Touch my I.C.O.”

And after the North American Bitcoin Conference in January, which highlighted 84 male speakers and three women, the official conference party was held at a Miami strip club.

Virtual currencies and blockchain, the digital ledger that forms the basis of the cryptocurrencies, were intended to be democratizing and equalizing forces, buoyed by a utopian exuberance. But women who have been trying to participate in the gold rush are finding a lopsided gender divide. And some say the culture is getting worse, with the male-dominated culture buoyed by a new fleet of wealthy crypto speculators known as “blockchain bros.”

That means the budding world is already in danger of looking like the rest of the technology industry, where women are decidedly a minority. Some studies estimate that women account for only 4 percent to 6 percent of blockchain investors. That imbalance matters because the early days of an industry are often when the fortunes are made — and those big winners then choose whom to invest in and what to build next, launching a cascade of consequences.

Now, some early female investors and entrepreneurs are beginning to sound the alarm and push back.

“Women, consider crypto,” Alexia Bonatsos, a venture capitalist, wrote on Twitter. “Otherwise the men are going to get all the wealth, again.”

Some crypto leaders are now organizing events, clubs and conferences to attract women to the industry. Ms. Bonatsos spoke at one such event this month in San Francisco. And Jalak Jobanputra, founder of the start-up investment firm Future Perfect Ventures, and other blockchain developers gathered in New York this month to discuss the issue. They later announced that they would form a blockchain diversity advocacy group called the Collective Future and create a diversity pledge for crypto companies to sign as a show of commitment.

“The early days are what decide the culture of an industry and who gets involved in making the decisions,” Ms. Jobanputra said. She cited the venture capitalists who funded eBay and Amazon and whom they funded next.

Arianna Simpson, an early cryptocurrency investor, said the surge of interest in virtual currencies from male novices should remind women that it did not take expertise or a Ph.D. to thrive in the ecosystem.

“Women always question if they’re qualified,” she said. “But look at these clowns around us.”

The response to some of the events has been encouraging, some of the women said. Brit Morin, a Silicon Valley entrepreneur, recently held a blockchain gathering for women that sold out in an hour. She moved the meeting to a bigger venue, where all 500 seats sold out again. So she set up a livestream for the event; that evening, 16,000 viewers joined to watch.

“We have an opportunity to rebuild the financial systems,” Ms. Morin said. “Women want to be part of that.”

The resistance follows increasing outrage at the lack of diversity in virtual currencies, punctuated by the sexist incidents involving DateCoin’s Facebook ad and Prodeum, the blockchain-for-fruit start-up. Neither company returned requests for comment.

The gender imbalance was also on display at last month’s North American Bitcoin Conference in Miami, which was organized by a prominent investor, Moe Levin. Mr. Levin originally slated 86 men and one woman as speakers. After complaints, he replaced two of the men with women to achieve what he thought should be enough: 84 men onstage and three women.

“It just coincidentally happened that there were more men than women speakers,” Mr. Levin said. “It’s not intentional not to include them. It’s just we don’t have time to include them.”

When others in the cryptocurrency industry realized the conference’s after-party would be held at a strip club, they encouraged Mr. Levin to change locations. He said the strip club was the most convenient and safest venue he could find.

“Downtown Miami doesn’t have a whole lot of event spaces,” Mr. Levin said. “And we needed a lot of security.”

“Moe does something just as sexist every year,” said Rose Chan, who founded the World Bank’s blockchain working group and now runs her own cryptocurrency project. “He switches it up, which actually means that he thinks about it.”

One group of female investors said they had decided to boycott the conference in the future.

Mr. Levin said this reaction surprised him. “There’s so many people who had a great time,” he said.

At some women-in-crypto events, frustration is giving way to anger and sadness. On a recent night, about 50 young women interested in cryptocurrencies gathered at the Woman’s Club of Palo Alto. Some were engineering students at nearby Stanford University.

Over wine, they shared their stories — some had been mistaken for hired models, others propositioned during job interviews, and many men had not believed they were engineers at all.

Catheryne Nicholson, the chief executive of BlockCypher, which provides infrastructure for blockchain applications, explained to some of the younger women why the gender situation had deteriorated.

Karen Hsu, BlockCypher’s head of growth, said she thought some of the gender concerns had been overstated. She said that at a recent conference, she had been asked if she was a speaker, which was validating.

“It was nice because he didn’t think I was a booth babe,” Ms. Hsu said, referring to hired models who stand near the booths of start-ups to draw the attention of conference attendees.

Other women spoke about how the culture of blockchain was slowly wearing them down. Jay Graber, a developer at Zcash, a new cryptocurrency aimed at enhanced privacy, was wearing small green earrings she had made out of RAM sticks used in cryptocurrency gear. She said she had become interested in blockchain after joining the Occupy Wall Street protests in 2011, and she viewed the technology as a tool that could take power away from big central banks. Now she’s not so sure.

“I never felt insecure before I got into this space,” Ms. Graber said. “But I just realized there is no one else like me. It is a very hard feeling when you don’t see anyone who is like you.”

Ms. Graber said she had considered leaving the industry.

“I have this perpetual sense of being on the outside of that conversation,” she said. “It’s just a general state of alienation.”