It turns out that card issuer Visa is in fact the culprit in an increasingly messy Coinbase customer support nightmare that’s seen multiple users’ cryptocurrency accounts hit with reverse transactions, unauthorized withdrawals, and other unexplained fees. The issue began picking up steam in online crypto communities earlier this month, and Coinbase first responded last week citing a change in how credit card companies classify digital currency transactions. The company at the time said it had identified a solution.

Late Friday, Coinbase disclosed on Twitter that it was Visa that was actually reversing multiple weeks’ worth of old transactions under a new so-called merchant category code, or MCC, which is used to classify a business or purchase by the type of service it provides and helps dictate how the Internal Revenue Service handles appropriate taxes for such purchases. According to Coinbase, Visa switched to a MCC “that allows large banks and card issuers to charge consumers additional fees,” resulting in what effectively looked like erroneous charges. Visa, however, says that is not true. 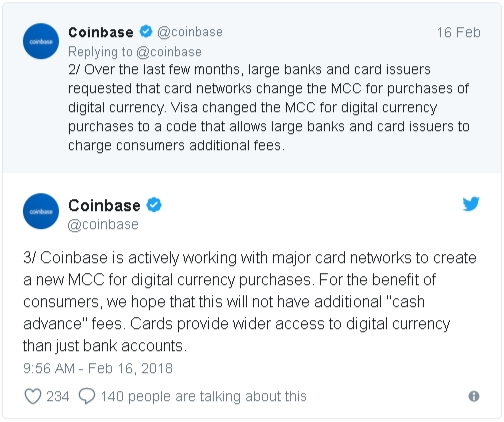 “Visa policies with respect to the correct coding of transactions have not changed. Cryptocurrency transactions must be properly coded so that issuers can rely on accurate and consistent information when making authorization decisions,” the company said in a statement. “We recently sent a communication to clients to explain the existing requirements, but there were no changes or reclassifications. It is inaccurate to say Visa made recent changes to the MCC code.”

Visa later issued a second, joint statement with payments processor Worldpay, which handles Coinbase transactions, writing in no uncertain terms, “This issue was not caused by Coinbase.” It’s still unclear what the nature of Coinbase and Visa’s dispute is here. Nonetheless, Coinbase is trying reassure customers that this won’t happen again in the future, but it’s doesn’t seem like a long-term fix is yet in place. “Coinbase is actively working with major card networks to create a new MCC for digital currency purchases,” Coinbase writes. “For the benefit of consumers, we hope that this will not have additional ‘cash advance’ fees. Cards provide wider access to digital currency than just bank accounts.”

It still appears like there’s a fair amount of the blame game happening on both sides, however, as Coinbase customers flooded the replies to the company’s tweets to say that funds are still tied up by banks and card issuers and all parties seem to be pointing affected users in a different direction. Visa says it is working on refunding customers, but the onus is still on those who’ve had their accounts drained by this logistical fumble to pursue the appropriate party and figure out exactly what to do.

All in all, not a great look for either Coinbase, Visa, or traditional banks, none of which seem to be working all that well together when it comes to handling cryptocurrencies.

Over the last two days, some customers who used a credit or debit card at Coinbase may have seen duplicate transactions posted to their cardholder accounts.

This issue was not caused by Coinbase.

Worldpay and Coinbase have been working with Visa and Visa issuing banks to ensure that the duplicate transactions have been reversed and appropriate credits have been posted to cardholder accounts. All reversal transactions have now been issued, and should appear on customers’ credit card and debit card accounts within the next few days. We believe the majority of these reversals have already posted to accounts. If you continue to have problems with your credit or debit card account after this reversal period, including issues relating to card fees or charges, we encourage you to contact your card issuing bank.

We deeply regret any inconvenience this may have caused customers.”

Update at 3:03PM ET, 2/18: Clarified that Visa says it did not make changes to the merchant customer code (MCC). Rather, the company said it “sent a communication to clients to explain the existing requirements,” and that no changes or reclassifications occurred with regards to the MCC.