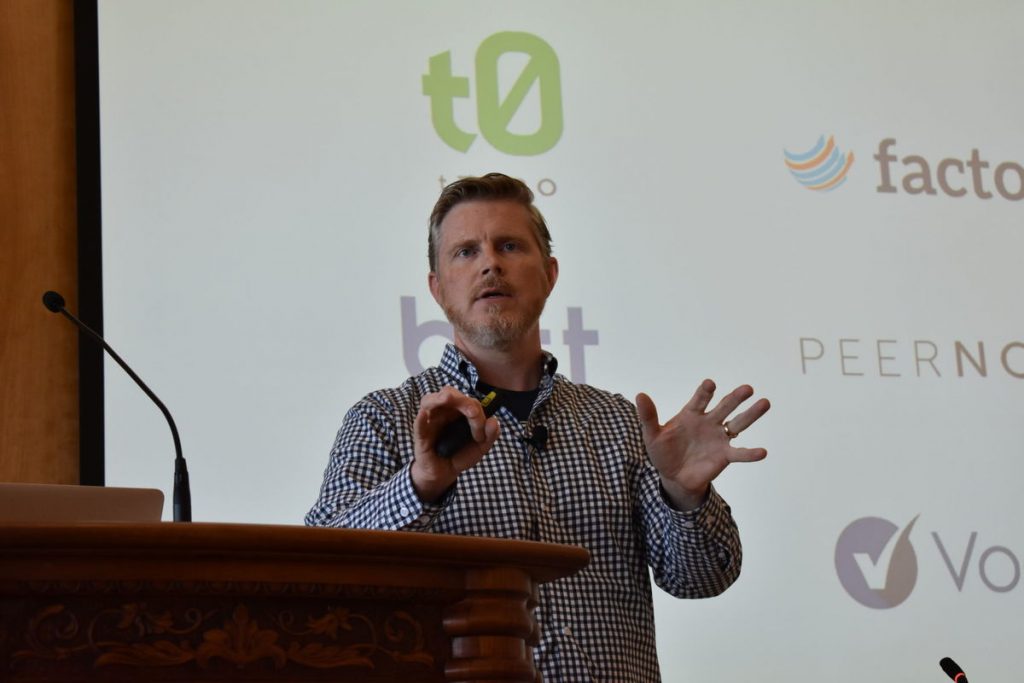 As comedian Ellen DeGeneres explained Thursday afternoon on her television show: “Everybody is talking about bitcoin, nobody understands it.”

Students, business professionals and investors tackled that question as they came together Friday at Brigham Young University for its first-ever Blockchain Summit. The summit, organized by BYU law student Ryan Lewis, pulled in an impressive array of experts working in this very new field.

But what is blockchain, how does it relate to bitcoin and how will it affect the layperson?

As Chad Bennett, founder and CEO of Heroic Cybersecurity in Provo, explained Friday morning, the “internet is the information exchange protocol,” and “blockchain is the value exchange protocol.” Just as the internet changed the way society, at a very basic level, exchanges information, blockchain advocates say this new technology will change the way society exchanges assets.

Jonathan Johnson, president of Medici Ventures and a member of Overstock.com’s board of directors, defined assets as: real property — like land or a home, currencies — including cryptocurrencies, or even stocks and bonds.

“An asset can be anything that, when I give it to you, you don’t want a copy. You want the actual thing,” Johnson said.

Sending someone an email or PDF — those are copies of the actual thing, he added. In that situation, users don’t care if it’s a copy. But a user does not want a “copy” of $100. They want the real thing.

“The blockchain allows for the digital transfer of assets in a way they will flow free and frictionless,” Johnson said.

At its very basic and simple core, blockchain is the highly technical and extremely difficult “math games” which have created the platform for a decentralized public record of assets to exist. As Bernard Marr explained in a Forbes article published Friday morning, “blockchain provided the answer to digital trust because it records important information in a public space and doesn’t allow anyone to remove it. It’s transparent, time-stamped and decentralized.”

“Blockchain is to bitcoin, what the internet is to email. A big electronic system, on top of which you can build applications. Currency is just one,” she said.

Johnson called bitcoin and other cryptocurrencies the first “killer app” to come out of blockchain technology. In a highly simplified analogy, cryptocurrency is like digital cash. For example, when two people go to lunch, and one person pays the second for their share of the tab, they have different options.

One option would be to use their smartphones and Venmo the money from one to another. That transaction, though, involves multiple users, or “trust brokers.” Venmo verifies the first person has money in a linked bank, verifies the subtraction from that fund, then verifies the transfer of that money to second person’s bank. On each end, the individuals’ banks also record the transaction on their own ledgers.

Another option is the first person can open their wallet, pull out some dollar bills and pay the other with cash. No one else is involved in that transfer of money except the two people. Using cryptocurrencies through blockchain technology is very similar to giving someone digital cash. Again, no centralized banks are involved in the transaction. It is just a transfer of money from one person to the next, in the form of bitcoin or other cryptocurrency.

Johnson explained the added benefit to cryptocurrency is, yes, that transaction is made directly like the real-world exchange of cash, but there is a digital record, or ledger of the transaction. It leaves a digital footprint, unlike real-world cash normally. In this way, assets can always be verified.

Because blockchain is tied to technology and not to any one government, business or entity, many companies are looking into its use as a way of publicly recording other assets, besides money. These include medical records, supply chain processes, property rights, insurance, contracts and even voting.

Blockchain technology and cryptocurrency is still very new, and yes, like the initial advent of the internet, people are still trying to wrap their heads around what it is. Honestly, for the layperson, it may not be the right time to jump into the fray, unless he/she has a solid understanding of the playing field. John Quinn, founder and chief risk officer of Storj, said during Friday’s summit that the cryptocurrency world is very risky right now for the uninitiated, as we’re in the “wild, wild West” phase of this industry.

That will change as regulation and more oversight comes, though, say blockchain advocates, of which Quinn is one. Johnson even believes people in many parts of the world may eventually be paid their wages in cryptocurrency.

For now, Lewis was just excited to have so many people gathered in BYU’s Gordon B. Hinckley Alumni Center to start the conversation on this new technology.