Litecoin Cash is about to breakaway from the Litecoin cryptocurrency, but not everyone is convinced it’s a great idea. The new token, expected to fork on Sunday evening, promises to use a different mining algorithm so crypto-fans with old hardware can put it to good use again. After attracting a lot of attention for its name, questions are starting to arise about the new token’s usefulness.

“Litecoin Cash doesn’t bring anything to the table,” Trevor Gerszt, CEO of crypto investment service CoinIRA, tells Inverse. “It touts that it has more coins and faster transaction times, but Litecoin already has more coins than Bitcoin, and Bitcoin Cash was developed to solve the problem of slow transaction times, so those concerns have already been addressed. Given that Litecoin Cash has no association with Litecoin and has even been denounced as a scam by Litecoin’s creator, we don’t see Litecoin Cash going anywhere.”

The new cryptocurrency, set to split from Litecoin at block 1371111, uses the SHA-256 algorithm for mining instead of Litecoin’s Scrypt, meaning miners can use older application-specific integrated circuit boards to create tokens. It has the same target block time of Litecoin in a bid to speed up transactions, 2.5 minutes compared to Bitcoin’s 10 minutes, while the team claims transactions will be 90 percent cheaper than those for Litecoin.

Litecoin Cash seems to have had a positive effect on its parent token, perhaps in part because Litecoin holders are set to receive 10 Litecoin Cash tokens for every Litecoin token they possess: 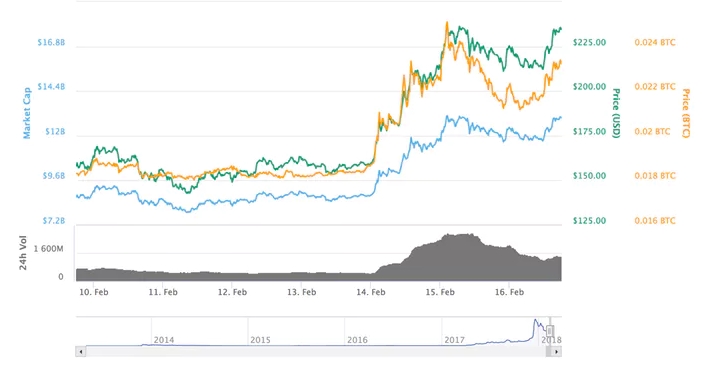 However, its name and community value have been questioned. Charlie Lee, creator of Litecoin, has gone as far as to call all forks that use the larger cryptocurrency’s name as “scams trying to confuse users into thinking they are Litecoin.” It’s not an unreasonable criticism: a mixup between Bitcoin and the Bitcoin Cash fork from August 2017 led to retailer Overstock charging Bitcoin Cash customers 85 percent less than the listed price.

Litecoin itself still ranks as the fifth-largest cryptocurrency, with a market cap of $13 billion. There’s no certainty that Litecoin Cash will fade into obscurity, as the fourth-largest token is the Bitcoin Cash fork at a market cap of $25.6 billion. Neither of them are close to taking Bitcoin’s top spot, with a $170.9 billion market cap and 35.4 percent share of the market. Instead, Gerszt agrees with Lee that for now, there is room for a cryptocurrency faster than the seven-transactions-per-second processing speed of Bitcoin.

“Bitcoin and Litecoin have different purposes right now, with Bitcoin acting like gold in being a store of value and Litecoin acting like silver in being an everyday currency for transactions,” Gerszt says. “Bitcoin is still the dominant cryptocurrency in the market and may have the strongest growth potential, but Litecoin isn’t going away anytime soon.”

Quite where Litecoin Cash will fall in this marketplace remains to be seen.