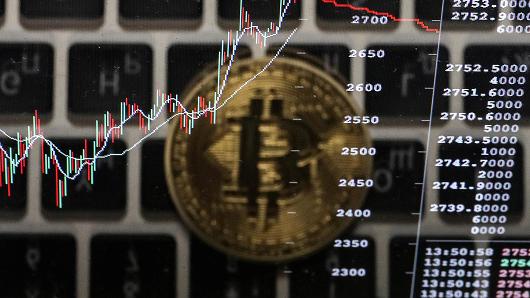 Bitcoin’s ties to the performance of U.S. stocks appears to be increasing.

On a 90-day basis, the correlation between the daily percent returns of the cryptocurrency and the S&P 500 is 33 percent, the highest since the cryptocurrency started gaining public attention in January 2016, according to Nick Colas, co-founder of DataTrek Research.

The previous high of the last two years was much lower, at 19 percent, in mid-December 2017, Colas said in a Thursday note. The long-run average for the 90-day correlation is negative 1 percent, his analysis showed.

Colas is one of the earliest Wall Street market strategists to begin writing about bitcoin. 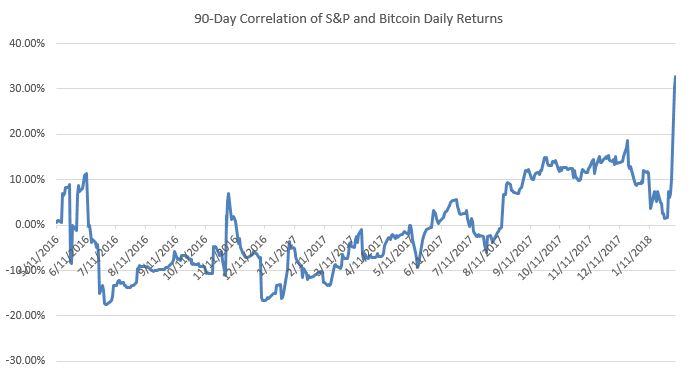 Bitcoin soared 2,000 percent in the 12 months through December to well above $19,000, helped by a surge of investor interest and speculation about increased attention from institutions. The world’s largest futures exchange, CME, and its competitor, Cboe, both launched bitcoin futures products in December, making it easier for institutional investors to buy into the cryptocurrency trend.

One of the selling points for investments in cryptocurrencies such as bitcoin has been their lack of correlation to established global financial markets. But as U.S. stocks plunged in the last week, bitcoin did not hold up and actually fell further, briefly below $6,000.

“Bitcoin’s attraction for institutional investors may increase correlation,” Morgan Stanley equity analyst James E. Faucette and his team said in a Wednesday note. “Our conversations with investors certainly give weight to that view—which raises a key question: if Bitcoin correlation with the broader market fully materializes, does that limit its ultimate potential?”

It is too soon to tell whether bitcoin can be a sustainable investment asset given regulatory uncertainty and the fundamentally different nature of the cryptocurrency compared with traditional assets. For now, if a correlation with stocks does exist, other analysts have suggested that cryptocurrencies such as bitcoin could be an indicator of appetite for risky assets such as equities.

“We don’t make a call on whether it’s going to go up or down but that it’s a risk in the marketplace, and it’s really far out on the risk spectrum,” Christopher Harvey, head of equity strategy at Wells Fargo Securities, said on CNBC’s “Fast Money” Wednesday. “And as risk gets sold it just adds fuel to the fire, and that’s the concern,”

On the other hand, “if we’re right and risk starts to be bid again, it wouldn’t surprise us to see a bid in some of the crypto markets,” Harvey said. On Wednesday, he raised his S&P 500 year-end price target to 2,950, a 10 percent increase from the day’s close.

Bitcoin was up about 8 percent near $8,171 on Thursday afternoon, according to CoinDesk’s bitcoin price index. U.S. stocks dropped more than 2 percent in Thursday trading.

For the year so far, the S&P is down 1.7 percent, while bitcoin has fallen about 40 percent.