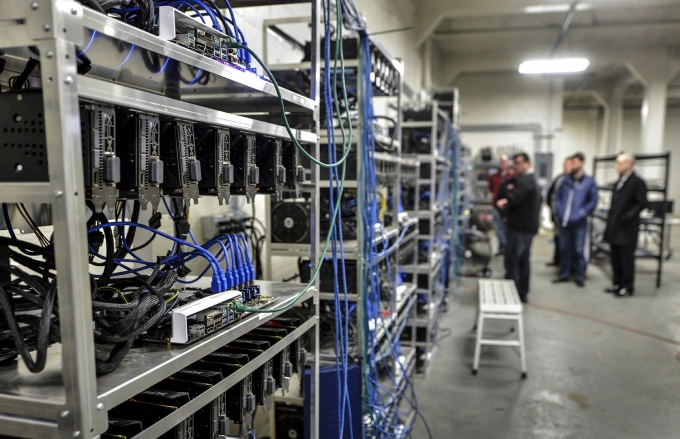 WYOMING — Tucked away in a nondescript warehouse in a Grand Rapids suburb, hundreds of custom-built computer servers are at work 24 hours per day, seven days per week.

As the rigs race to process complex algorithms, they generate ample amounts of heat, requiring considerable ventilation and cooling for the facility, where the constant din of massive fans limits the opportunity for conversation.

While it may look similar to a traditional server farm, the proprietary rigs stacked inside the 15,000-square-foot warehouse in Wyoming work to verify a wide variety of transactions and records that are then stored in the blockchain, a decentralized series of servers that hold everything from financial information to medical records to voting documents.

The more transactions and information that get verified, the more Ensource Capital LLC and its investors are rewarded in Ethereum, the surging cryptocurrency that grew out of Bitcoin, but operates on far better technology, according to Max Friar, the company’s co-founder and chief marketing officer.

Ensource Capital recently raised $500,000 in equity toward a $4 million goal, according to a filing with federal securities regulators. The West Michigan startup plans to use the investment to ramp up its mining capacity, joining a growing list of entities ranging from century-old corporations to anonymous speculators who are experimenting with cryptocurrencies.

“It’s all coming to life,” Friar said of the company’s mining capabilities.

Once Ensource fully ramps up its mining operation as a result of the new investment, the company will be the largest known operator of its kind in the state of Michigan, he said.

Still, the technology’s newness and the volatility of cryptocurrencies added a layer of complexity as the founders sought out capital to grow the business. Neither traditional banks nor other alternative lenders would touch it, Friar said.

“We’re helping investors, and that’s probably been the biggest challenge is the education (aspect),” said Friar, who’s also managing partner of Grand Rapids-based Calder Capital LLC, an M&A consulting firm. “I’ve told people that if this was a $2 million EBIDTA manufacturing company that had been around for 20 years, raising a couple million dollars would have been a piece of cake. People have to get comfortable with even the industry and the feel.”

The foundation for Ensource Capital dates back several years when Warner began cryptocurrency mining as a hobby at home with his son, eventually expanding with more equipment at his Jenison manufacturing space.

Ensource Capital’s transition to a new full-scale operation comes at a time when more individuals and companies are expressing interest in cryptocurrency and the underlying blockchain technology. However, that new-found interest has brought about considerable volatility in the value of the various cryptocurrencies, which skeptics had long warned about.

Friar and other sources contacted for this report agreed that as long as cryptocurrencies remain unregulated –– a key attribute for many who get involved in the space –– that volatility will continue.

“Myself and the other managers, we don’t mind (the volatility),” Friar said. “We’re fine with that. We’ve already calculated where Ethereum has to be to break even on the fund and it’s significantly lower than it is now.”

According to Phil Koster, a senior cloud services engineer at Grandville-based Trivalent Group Inc., an I.T. and cybersecurity firm, investors in blockchain need to take calculated risks like in any other investment.

“Mining itself is a fairly speculative market, but there’s a formula you can get into and figure out your profit and loss,” Koster said. “It’s a lot like the stock market. You’ve got to know what you’re doing.”

Koster also noted that cryptocurrencies have been popular with senders of ransomware, a kind of software that takes over files or a computer network until a ransom is paid. In recent months, as more volatility has set into the cryptocurrencies, that activity has dropped off, he said.

“Because of the volatility, the ransomware folks are pricing themselves out,” Koster said. “It’s too unstable.”

Even while skepticism over the long-term validity of cryptocurrencies remains, the adoption of blockchain technology has gained momentum in recent months as a variety of companies tout its usefulness for everything from supply chain management to proving ownership of intellectual property.

For example, Rochester, N.Y.-based imaging and photography firm Eastman Kodak Co. announced in early January that it would launch KodakCoin, a cryptocurrency based on blockchain technology aimed at allowing photographers to have more control over their images.

“For many in the tech industry, ‘blockchain’ and ‘cryptocurrency’ are hot buzzwords, but for photographers who’ve long struggled to assert control over their work and how it’s used, these buzzwords are the keys to solving what felt like an unsolvable problem,” Kodak CEO Jeff Clarke said in a statement. “Kodak has always sought to democratize photography and make licensing fair to artists. These technologies give the photography community an innovative and easy way to do just that.”

Shares of Eastman Kodak (NYSE: KODK) more than tripled in the days following the announcement.

Elsewhere, Nevada-based Blockchains LLC acquired 67,000 acres at an industrial park in the northern part of the state for a potential corporate headquarters and software design research center for the mysterious company, according to a report in The Nevada Independent. The land sale was reportedly valued at about $175 million.

At the time this report went to press, one Ethereum coin had a value of more than $1,100 and the currency had a market capitalization of more than $100 billion.

According to Brian Schwartz, a former Wall Street finance executive and Grand Rapids-based entrepreneur who’s been following and writing on the rise of cryptocurrencies like Bitcoin and Ethereum, the technologies must mature before they’ll be taken seriously by traditional investors.

“The credibility is going to come from either the banking system accepting it in some form or central banks or governments accepting it in some form,” Schwartz said. “I think that’s a long ways away. I don’t believe it’s a currency. I would probably consider it an asset — a speculative asset. It’ll just take time to see whether this turns into something that’s credible or it just goes to zero.”

Nonetheless, Friar with Ensource Capital remains bullish on the fledgling operation, noting that the company’s framework would allow it to switch to a variety of other coins in the event that Ethereum becomes an unprofitable cryptocurrency.

“Increasingly, large companies to small companies are interested in implementing blockchain technology where applicable,” Friar said. “A lot of them are still in the phase of trying to understand where that is.”