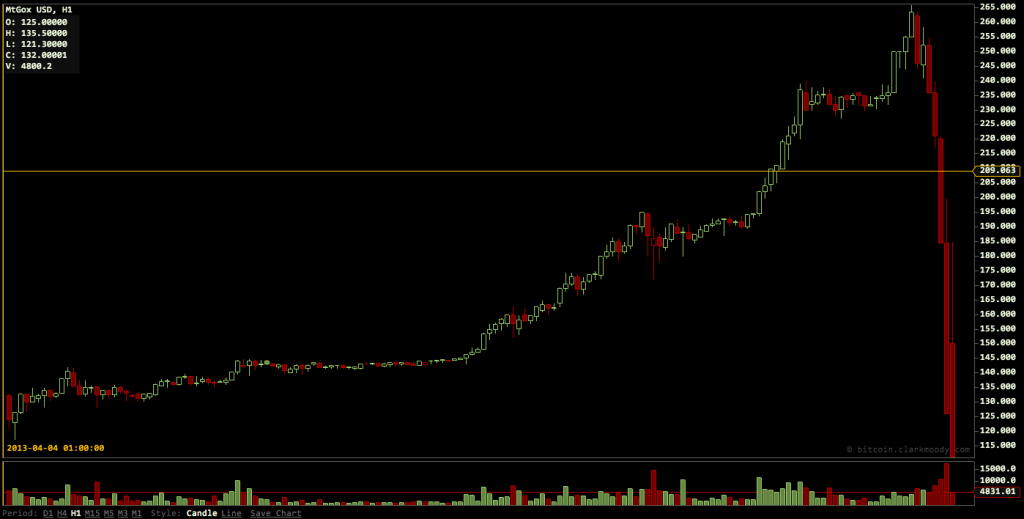 The cryptocurrency market rout may be the beginning of a needed washout that digital currency enthusiasts have been waiting for.

“The markets over the last year have certainly appreciated more quickly than the fundamentals have, and this is a shakeout to hopefully draw the financial reality closer to the fundamental reality,” said analyst Chris Burniske, co-author of “Cryptoassets: The Innovative Investor’s Guide to Bitcoin and Beyond.”

In a stunning 2,000 percent surge over 12 months to a December peak above $19,000, bitcoin captured enough of Wall Street’s attention to spur the launch of futures contracts on the world’s largest futures exchange, CME, and its competitor, Cboe.

Other digital currencies, such as ripple and ethereum, leaped even more rapidly. Token sales, or initial coin offerings, raised the equivalent of more than $4.2 billion last year, according to financial research firm Autonomous Next. And tiny companies saw their stocks skyrocket after adding “blockchain” to their names.

Total market capitalization of cryptocurrencies globally over the last 12 months

“The days of raising hundreds of millions of dollars on just a whitepaper are over,” said Joe DiPasquale, founder and CEO of BitBull Capital, a cryptofund that invests in other cryptofunds. “We’re finding a higher bar for ICOs than ever.”

Meanwhile, digital currency lending and exchange company Bitconnect announced Tuesday it was shutting down its platform. The company, which has promoted daily returns for customers buying its BCC coin, said it received cease-and-desist letters from securities divisions in Texas and North Carolina.

The BCC token plunged more than 90 percent from above $300 to near $19.30 after news of the shutdown, according to CoinMarketCap.

Bitconnect’s shuttering may indicate how some of the more speculative parts of the wild cryptocurrency market are being weeded out.

Former Fortress hedge-fund manager Michael Novogratz tweeted in late November that Bitconnect “seems like a scam. an old school ponzi,” a sentiment that ethereum co-founder Vitalik Buterin supported in a retweet. In December, Novogratz, now head of Galaxy Investment Partners, said he delayed the launch of his firm’s cryptofund due to “market conditions” but remained optimistic on the space.

Digital currency enthusiasts say blockchain technology can one day transform the world as much as the internet did. The technology eliminates the need for a third-party intermediary, such as a bank, by quickly creating a permanent, open record of a transaction between two parties.

Well-known companies, such as IBM and Accenture, are also investing in and developing blockchain projects.

The enthusiasts often compare the current state of cryptocurrency development to the 1990s, when a few companies began to embrace the potential of the internet. Those analysts point out it wasn’t until about a decade later when internet businesses such as Facebook, Google and Amazon.com really took off.

In the same way, bitcoin — the first application of blockchain technology — and the hundreds of other cryptocurrencies trading today may only be the first iteration of a transformative technology.

In 10 years, “half of the companies that we believe are blockchain players may not be in the index or may not exist,” said Eric Ervin, president and CEO of Reality Shares. He pointed out that when the iPhone launched about a decade ago, few would have expected the BlackBerry would become obsolete 10 years later.

On Wednesday, Reality Shares launched its NexGen Economy ETF (BLCN) with Nasdaq to invest in the 50 to 100 companies working on blockchain projects. BLCN closed up 0.59 percent Wednesday despite the slide in bitcoin’s price.

“We look at dips as buying opportunities,” BitBull Capital’s DiPasquale said. “There’s not the fear of an additional 30 percent dip right now.”

The latest plunge in cryptocurrency prices followed comments from South Korean authorities about plans to limit market speculation, and reports that Beijing is planning further restrictions on cryptocurrency trading in China.

“The regulatory fears have been a big hit to sentiment, but in my view it’s temporary,” said Brian Kelly, a CNBC contributor and head of BKCM, which runs a digital assets strategy for clients. “There is a handoff taking place from Asian investors who are being prohibited from investing, to U.S. and Japanese investors, who are just beginning to discover the asset class.”