Once you’ve bought Bitcoins (BTC) or other cryptocurrencies via an exchange (like Bitstamp), if you plan to spend your cryptocurrency right away, you can do so directly from the exchange. If you prefer to hang on to your digital assets, you’ll need a secure wallet to which you can transfer your virtual coins.

In this guide, we’ll explore five of the very best cryptocurrency applications available today for storing your digital wealth. Each of these programs allow you to generate private keys, which you can store safely, rather than trusting an online exchange which can be hacked or go out of business.

All of these clients are known as ‘hot’ wallets in that by default they’re connected to the internet at all times. If you are moving large amounts of Bitcoin, consider creating a ‘cold’ offline wallet to store your assets (see our guide to creating a secure cold storage Bitcoin wallet). 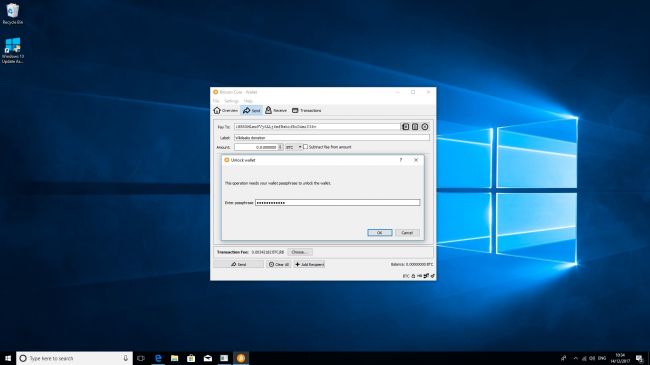 The original and definitive Bitcoin client

Original Bitcoin clientProvides better protection against fraudRequires large amounts of space and bandwidth
Bitcoin Core is the original BTC client and is available for Windows, Mac and Linux. Core is a ‘full node’ Bitcoin client, meaning that on first-run it will download the current version of the blockchain (currently around 160GB) by connecting to other nodes. It will then continue to download and process data about Bitcoin transactions.

One advantage of this is that it’s much more difficult to link a specific BTC payment address to your identity as Core downloads data about all Bitcoin transactions everywhere. This also protects you against certain types of fraud such as someone trying to spend the same BTC twice, or fooling you into believing you’ve received funds you haven’t actually got.

Core comes preconfigured to run through the Tor anonymizing network. This makes it very difficult for anyone to link sending or receiving BTC to your home IP address, ensuring your privacy. All this requires huge amounts of bandwidth – Core must be connected to the internet every day to stay in sync with the network.

On first launch, Core will create a wallet file (wallet.dat) containing your private keys. By default anyone can access it, but you can encrypt the wallet with a password if you wish. (We’ve got a handy guide on setting up Bitcoin Core). 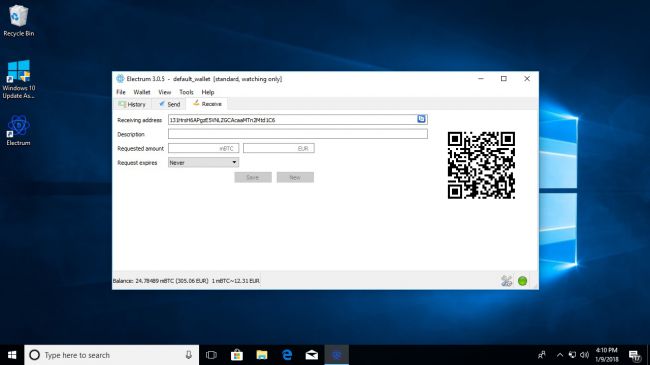 A popular ‘thin’ wallet client worthy of your attention

Lightweight and easy to set upRecover your BTC using a wallet seedRelies on servers to verify transactions
Electrum has been around since 2011 and works with Windows, Mac and Linux. It’s one of the most popular ‘thin’ wallet clients, in that instead of downloading the entire Bitcoin blockchain, it connects securely to other servers to verify your BTC balance and process payments. This means you can set it up in minutes and it takes up very little space on your hard drive.

Electrum uses a ‘hierarchical deterministic wallet’, in that when you first launch the program it generates a random ‘seed’ of 12 dictionary words, from which it derives the keys necessary to spend and receive BTC. Electrum displays the seed as you create your wallet and requires you to write it down. This means that if you lose access to this version of Electrum, you can easily reinstall it on another machine and use the seed to restore your BTC.

Unlike the Bitcoin Core client, Electrum offers you the option to encrypt your wallet file during setup, although you can choose to leave it unencrypted if you wish. You can also use Electrum in ‘cold storage’ mode to create a ‘watching only’ wallet. This allows you to receive Bitcoin payments and see your balance, but not spend the coins, which may be useful if you’re buying BTC as a long-term investment.

As a ‘thin’ client, Electrum relies on other servers for payment information, making it more vulnerable to certain types of hacking than ‘full nodes’ such as Bitcoin Core. See here for more information about how Electrum tries to protect you from this. 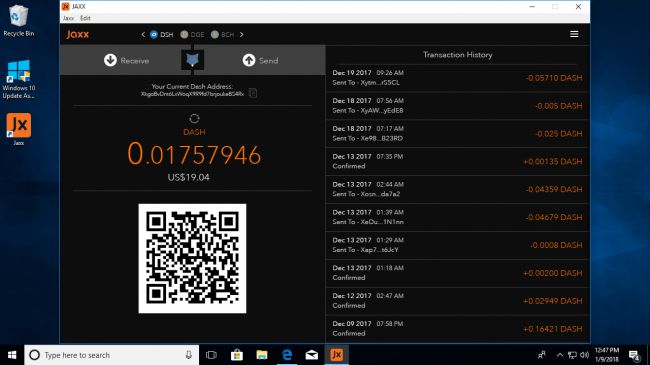 Very simple interfaceSupports multiple cryptocurrenciesPotentially vulnerable
Jaxx was first developed in 2014 and serves not only as a Bitcoin wallet but an app which can store multiple cryptocurrencies such as Litecoin, Dash, Ethereum and Bitcoin Cash. Ripple is not currently supported but the Jaxx team have hinted they may support this feature in the future. (For a full list of supported currencies see here).

When first run, Jaxx displays a 12 word ‘master seed’ similar to Electrum which you can write down and use to restore your wallets if you lose access to the original program.

The interface is deceptively simple in that you can quickly and easily switch between wallet balances. Jaxx has also integrated Shapeshift support. This functions as a built-in currency exchange, allowing you to quickly exchange crypto balances, for instance to convert DASH to BTC. You can view your updated balances as soon as processing is complete.

Jaxx is available as a Chrome extension as well as for Windows, Mac and Linux. There’s even a mobile app, so it’s likely you can view all crypto balances from a single device.

The software is closed source, however, so cannot be reviewed by the community in order to hunt for security bugs. Note that one such bug was discovered in June 2017 which allows someone with access to your machine to extract your master seed and steal your coins. Until this is fixed we recommend using Jaxx only for storing and exchanging small amounts. 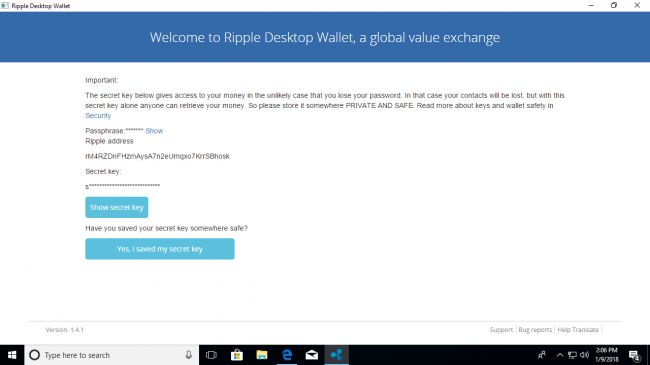 Easy to set up wallet for Ripple

Cold storage optionNot difficult to get goingBeta softwareFee of 20 XRP to activate wallet
Ripple is one of the top five cryptocurrencies in terms of capitalization and although it was designed to facilitate transactions between banks, many individuals also use it for speculation and to make payments.

Unlike more popular currencies like Bitcoin, the official desktop client is no longer maintained by the original creators. Fortunately the community has continued to maintain it in the form of Rippex.

Aside from being seemingly the only desktop client available for Ripple, Rippex is very easy to set up. On first-run it generates a ‘secret key’ which you can write down to restore your wallet in case anything happens to it. The client also requires you to encrypt your wallet file with a password, making your money harder to steal.

In order to activate your wallet you have to pay a fee of 20 XRP (around $43 at current exchange rates, which is about £32). Once you’ve done this, you can set up a ‘cold’ offline wallet if you prefer to store your secret keys offline for safety reasons.

If you want to store your XRP outside an exchange but don’t want to pay the fee for Rippex, you can also generate a paper wallet instead from https://ripplepaperwallet.com. The website will load the necessary code into your web browser – be sure to disconnect from the internet before creating the wallet.

Rippex is available for Windows, Mac and Linux. 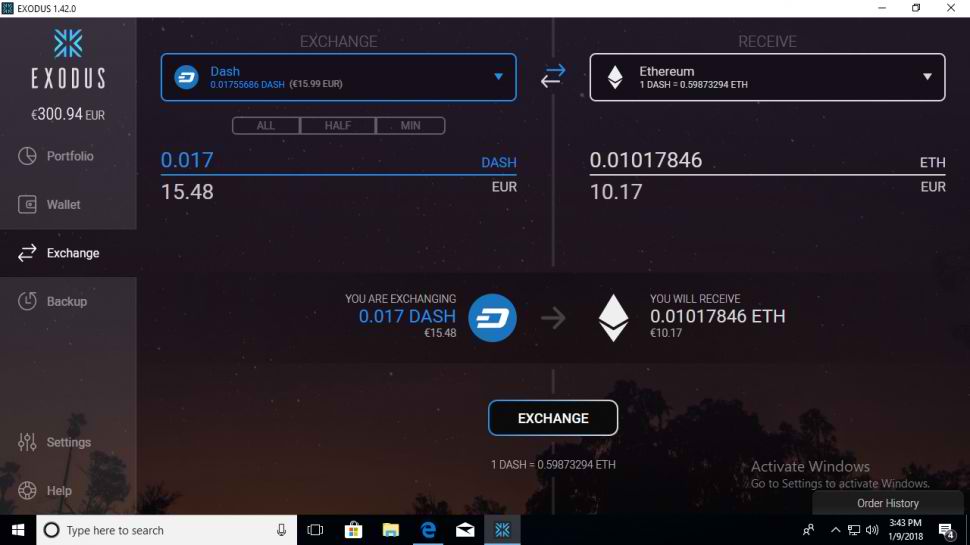 Store and exchange multiple currenciesStunning visual interfaceNot open source
Exodus is a multi-currency wallet and can hold various types of coins and assets. The setup process is very simple. Like Jaxx, you create a 12 word ‘master seed’ which you can write down and use to restore your wallet if you’re no longer able to access the original. (Incidentally, if you’ve previously created a master seed using Jaxx, Exodus can restore these too). Once setup is complete, Exodus will also prompt you to choose a password to protect your wallet.

Your digital assets are shown in a user-friendly pie chart. Unlike the other wallets we’ve discussed here, you can also choose different ‘skins’ to make your client easier on the eye. Use the localization settings to change the default currency (USD) to your home currency if necessary.

The wallet software also supports exchanging crypto-assets and currencies using Shapeshift, and even lists the percentages of assets you hold as part of your ‘portfolio’. Sadly Dogecoin is no longer supported.

Exodus is also not 100% open source. The company claims on its website that doing so would give away trade secrets and make it easier for hackers to create bootleg versions of its wallets. In light of this, if you use Exodus you’ll have to trust that there are no undisclosed security bugs or backdoors built into the software.