It makes perfect sense to want to own something that is has increased in value 13-fold in the last year, but is part of Bitcoin’s value due to the social status it brings?

A study conducted by Bernstein Research has recently suggested just that. The analysts agree that limited supply plays a big role in the price surge, but the social standing that comes with owning Bitcoin may also be causing investors to join the hype:

Bitcoins do not provide investors with cash-flows or other benefits, but the maximum supply of Bitcoins is fixed and so the price is driven by speculation on the potential demand for Bitcoin.”

Just like high-end liquor, fancy cars and fashion brands, Bitcoin is acting like a Veblen good. The higher prices for certain goods can be attributed to the reinforcement of the social status attached to the product, something Bernstein calls “snob value.” The analysis added:

In mid-2017, we conducted a consumer survey of 1,070 Chinese Premium Goods Consumers which showed that Veblen Demand is the third most important motivator of brand choice in brands.” 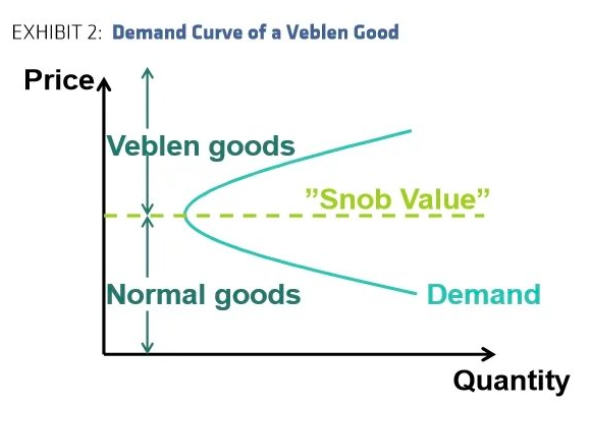 Bitcoin is perceived as difficult to understand for those who aren’t “in the know.” Thus, owning Bitcoin immediately gives one that “snob value,” implying greater intelligence or insight.

In a strange, yet practical comparison, Bernstein compares Bitcoin to E.Jiao – traditional Chinese medicine derived from donkey skin. In 2016, China produced 5,000 tons of E.Jiao, which required 2.5 mln donkey skins. This has lead to a scarcity of donkey skins and cheap imitations coming to the market.

The original product’s leading manufacturer – Dong E-E.Jiao – has been able to raise the price of its product 18 times over the last decade because of the Veblen good-quality that has become attached to it with its scarcity.

While not necessarily a good, in the early 90s, with the dot-com boom, there was a certain social standing that came with being involved in a technology company. People were caught up in the hype partially because they wanted to be part of the early elite that were making waves in technology.

It has already been seen that companies that simply add Blockchain to their name get huge waves of unjustified interest, and again, this could be likened to the social status that comes with being part of a company that is in the cryptocurrency space.