The biotech sector could be on the verge of its next major leg higher.

The key catalyst could be Vertex Pharmaceuticals Inc. (VRTX) and positive news on its latest Cystic Fibrosis data. As of July 19, the iShares Nasdaq Biotechnology ETF (IBB), a proxy for the biotech stocks, is sitting right at resistance around $320. A break higher could see the ETF rise by another 6 percent over the coming weeks.

Vertex shares rose by as much as 20 percent in daily trading to approximately $160 per share after the company reported positive phase 1 and 2 data for its treatment in patients with Cystic Fibrosis. With the stock rising sharply, Vertex is having a positive impact on the Biotech ETF because the stock accounts for roughly a 3.75 percent of the its weighting. The ETF’s gain also is having a positive spill-over effect on the rest of the sector, helping to pull other biotech names along.

Since the ETF broke above $300 around June 20, it has had a tough time breaking above $320. But the latest news from Vertex is helping to attract more buyers and is positioning the biotech ETF to retest the $320 resistance level again. A break above $320 could easily send the ETF to around $340.

A strong earnings season might help push the biotechs above $320 . There are a number of Biotech heavyweights expected to start reporting results next week with Amgen Inc. (AMGN), Biogen Inc. (BIIB), Celgene Corp. (CELG), and Gilead Sciences, Inc. (GILD) leading off. In an article published in Barron’s, it notes that Cowen thinks some of the companies most likely to beat estimates are Alexion Pharmaceuticals, Inc. (ALXN), Biogen, and Vertex.

The sector has already been outperforming the broader market throughout 2017, up more than 20 percent, nearly doubling the S&P 500 returns. Despite the strength, it’s the technology stocks, not biotech, that have attracted the most public attention. 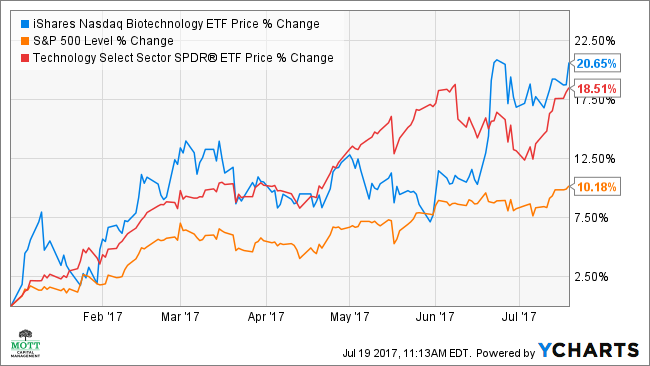 To be sure, a string of earnings disappointments in biotech could undermine any breakout or could turn a breakout into a wholesale retreat. But the current circumstances could not be better for a big upward move in the biotechs.