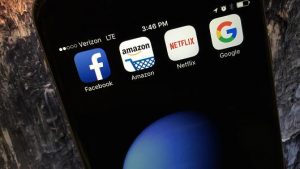 In recent weeks, the stock market has been all about one story: the dominance of big-cap tech companies.

The FANG stocks — Facebook (FB), Amazon (AMZN), Netflix (NFLX), and Google (GOOGL) — have now been renamed the FAAMG stocks — adding Apple (AAPL) and swapping in Microsoft (MSFT) for Netflix — with investors fixated on whether these stocks’ performance is setting markets up for a crash later. According to data from Goldman Sachs, these five companies have added a combined $600 billion in market cap this year alone.

This is *not* unusual

Julian Emanuel, a strategist at UBS, noted through the end of last week, 33% of the S&P 500’s return for this year was attributable to the FAAMG stocks, a proportion exceeded just three times in the past 20 years.

Something that has occurred just a fifth of the time in the last two decades may seem like an aberration.

However, consider the years in which the S&P 500 finished higher and the top 5 performers accounted for less than 20% of the gains. It’s just as infrequent.

Don’t Miss: The FINTECH sector is growing by leaps and bounds

Or as Emanuel wrote in looking at how unusual it is for gains to be this concentrated among a few stocks, “Not very.”

And so it isn’t just that clustering of returns among a few stocks isn’t rare, but that the stocks doing the clustering are not even new stocks. To invert the old market adage, this time is not different.

Breaking: Is Gold Headed to $1500/ounce – Could this company take advantage of the upcoming Gold rush?

As for what could tip investors off to the end of the current bull run, Emanuel says that barring a significant jump in valuations or new money flowing into stocks, a “seminal event” like a major merger or Apple hitting a market cap of $1 trillion (versus about $750 billion today) without cash repatriation could be a sign that enthusiasm for tech stocks has peaked.