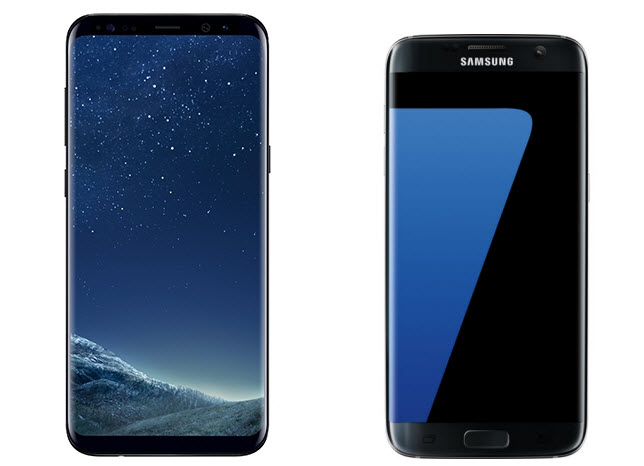 Think the Galaxy S8 is a deal big? Well Samsung has an even bigger one in the shape of the eye-popping Galaxy S8 Plus. I’ve already explored how these two new smartphones differ, but is the Galaxy S8 Plus a good upgrade to the Galaxy S7 Edge which it replaces? Or is the older phone now a bargain you should look to instead?

Displays – Beauty And The Beast

Like the Galaxy S8, it is impossible to discuss the Galaxy S8 Plus without starting with the display because Samsung’s 2017 smartphone screens have got a lot bigger…

Yes, the Galaxy S8 Plus panel is a massive 0.7-inches larger than its predecessor. It also covers a class leading 84% of the front of the phone (marginally more than the 83.6% of the Galaxy S8) which creates a truly stunning looking device (the iPhone 7 Plus has 67%). The display is stronger too with Gorilla Glass 5 surviving falls better than Gorilla Glass 4 (though resistance to scratches is similar).

Aside from size and strength, the Galaxy S8 Plus has gained Mobile HDR Premium certification which means increased brightness and contrast levels that make it ideal for mobile HDR content coming to Netflix and Amazon Prime Video.

The Galaxy S8 Plus display is stunning for watching video

That said both phones default to 1080p, lower than their native resolutions. The Galaxy S8 Plus runs at 2220 x 1080 (due to its longer 18.5:9 aspect ratio) while Samsung dropped the Galaxy S7 Edge to 1920 x 1080 with the update to Android 7.0. The latter benefits from an increase to its already excellent battery life, but seeing the latter ship at a lower resolution on day one poses more concerning questions in this area (more later).

Design – How Big Is Too Big?

Even compared to the 5.8-inch Galaxy S8 (left), the Galaxy S8 Plus is significantly larger

The smaller bezels also see the home button removed and replaced by on-screen navigation keys with the fingerprint sensor moved to the back. This position is contentious as it is up high to the right of the rear camera, making it a big stretch and you’ll almost inevitably smudge the camera lens each time you unlock. So here the Galaxy S7 Edge holds the advantage.

To compensate for this the Galaxy S8 Plus matches the Galaxy S8 with the introduction of iris and facial recognition. Ignore the latter as it can be fooled by a photo (Samsung accepts the flaw), but the former is fast and very secure – though having to point your phone at your face each time makes it a conspicuous method and a pain to use when walking.

Despite this the Galaxy S8 retains key practical parts of the Galaxy S7 Edge: microSD remains (crammed inside the sim card slot), as does IP68 dust and water resistance allowing for 30 minutes of full submersion in up to 1.5 metres of water. There’s also a common sense shift to USB Type-C as the new connector continues its honourable mission to replace all other USB form factors.

Like the Galaxy S8 you’ll only get the Galaxy S8 Plus in Midnight black, Orchid Grey and Arctic Silver at launch but with the Galaxy S7 Edge available in many more colours, expect Samsung to add new options right until the Galaxy S9 is with us.

This isn’t the end of the world as the 12 megapixel, f/1.7 aperture shooter is still excellent (if not top of the class) and you’ll still get optical image stabilisation (OIS) and 4K video recording. Samsung says Galaxy S8 Plus improvements instead come from new multi-shot image processing software (multiple shots are taken and combined into a single image).

A pre-release version of the Galaxy S8 Plus I used still found it lagging behind the Google Pixel (sample below). This should improve, but remember Samsung may well also being this new image processing to the Galaxy S7 Edge in a future software update.

Galaxy S8 (left) vs Google Pixel XL (right) shows the latter coming out on top, but more testing is needed

Where you can expect a significant step up, however, is the front facing camera. Out goes the Galaxy S7 Edge’s mediocre 5MP camera in favour of a new 8MP module. You’ll also get Snapchat-style filters, though again expect these to come to the Galaxy S7 Edge eventually.

Note Samsung is still delivering a different chipset to the US than the rest of the world but promising very similar performance:

Where there are more significant upgrades is connectivity. Both the Galaxy S8 and Galaxy S8 Plus upgrade the Galaxy S7 Edge’s Bluetooth 4.2 to Bluetooth 5.0 (2x speed, 4x range) and support one gigabit (1,000 megabit) 4G, even if carriers may never offer these speeds until long after this phone is retired.

TouchWiz continues to get more attractive as Samsung evolves its polarising Android skin. I still prefer stock Android, but there’s no denying Samsung is making more cohesive software than ever before. Sadly it’s also more bloated.

The new features will come to the Galaxy S7 Edge in time, but at launch the new Galaxies will have exclusive access to Bixby (a Google Now/Assistant/Goggles hybrid which gets its own hardware button below the volume rocker) and Samsung Connect (a Google Home-style IoT hub), plus all the other bloatware you don’t really need but accepted a long time ago.

Bixby’s information screen is a clear copy of Google Now

Unfortunately the Galaxy S8 Plus still ships with Android 7.0 when Android 7.1 is a) nearly six months old, and b) a huge advance. Again, despite Samsung’s promises, if you buy a Galaxy smartphone one of the things you have to accept is software updates will be slow.

The Galaxy S8 and Galaxy S8 Plus do have a neat trick up their sleeve though, which the Galaxy S7 Edge cannot do: turn into a barebones PC. Spend $150 on Samsung’s optional DeX dock and you can connect a monitor (via HDMI), keyboard and mouse (via USB) and use a desktop-style interface with Android apps and Citrix and Amazon Workspaces compatibility.

When paired with the DeX dock, users can create a basic multi-window desktop environment which runs Android apps

It’s not quite as advanced as Chrome OS (and you could just buy a Chromebox for $150) and you can’t use your phone at the same time, but it remains a tantalising peak at the future of smartphones.

The Galaxy S8 and Galaxy S8 Plus are very thin, but should they have been thicker with bigger batteries?

On the flip side, the Galaxy S8 Plus battery will age better as it has improved cycle longevity losing just 5% of its capacity after one year versus 20% with the Galaxy S7 Edge. Its wired and wireless charging is also slightly faster (though Samsung didn’t say by how much), but brace yourself for the cost of replacing all your micro USB charging cables.

Perhaps more important than this $100 increase, however, is the fact that these days you can pick-up a Galaxy S7 Edge for little more than half that price and there are plenty of second hand models floating around for less than that. You won’t get the $99-valued AKG headphones Samsung bundles with the Galaxy S8 Plus, but you may not need them?

The Galaxy S8 and Galaxy S8 Plus may not be massive upgrades internally, but those stunning displays will win over a lot of customers

Just like the Galaxy S8, the Galaxy S8 Plus looks truly stunning. Unlike its smaller stable mate, however, it is a much larger and heavier phone than its predecessor. This is worth bearing in mind in particular when it comes to reaching for that badly placed fingerprint sensor.

It is also worth noting that the Galaxy S8 Plus has the same camera and battery capacity as the Galaxy S7 Edge and is only marginally faster. So that increased price tag needs careful consideration.

There’s no doubt every Galaxy S8 Plus owner will attract envious glances from others, but it isn’t perhaps as big an upgrade over the Galaxy S7 Edge as many may have assumed based on looks alone. The 2016 phone is also clearly better value one year on, but if you still opted for that stunning 6.2-inch display I wouldn’t blame you in the slightest.

Galaxy S8 Vs Galaxy S8 Plus: What’s The Difference?