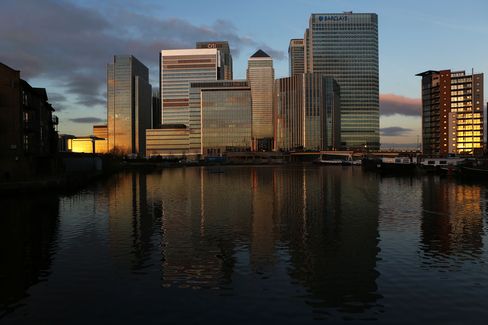 The U.K.’s biggest banks and financial firms could gain an additional 12 billion pounds ($14.6 billion) a year in revenue from Britain leaving the European Union, according to a report from a pro-Brexit lobby group.

Leaving the 28-nation trading bloc and ending membership in the EU single market for trade and services would help Britain cut “stifling Brussels red tape” to help U.K.-based financial firms grow sales, the Leave Means Leave campaign said in the report published on Sunday. London will also avoid a banking crisis and a fight for the survival of the euro area, according to the group.

The report comes in stark contrast to warnings from numerous global financiers arguing the City of London will be damaged by Britain leaving the EU, putting at risk tens of thousands of jobs and billions of pounds in revenue and taxes. Barclays Plc Chief Executive Officer Jes Staley said Friday he’s looking at “incremental steps” to relocate operations elsewhere in the trading bloc to offset the impact from Brexit.

“The U.K. is facing a very promising and profitable future outside the EU,” Richard Tice, co-chairman of Leave Means Leave, said in an e-mailed statement. “Being able to cut unnecessary regulation and bring back legal jurisdiction to the U.K. opens up a whole host of opportunity.”

Britain crashing out of the European single market could cost financial firms in the U.K. almost 40 billion pounds in lost revenue, deprive the nation of 10 billion pounds in taxes and lead to 70,000 jobs relocating overseas, according to a report earlier this month prepared by Oliver Wyman on behalf of TheCityUK lobby group, which represents the biggest banks and insurers in the country. That many jobs would only be at risk if all intra-EU trade from London collapsed, according to Leave Means Leave.

In contrast to warnings over the relocation of business overseas, the Leave Means Leave report said European financial companies may consider relocating to London following Brexit to keep access to the “deepest, most liquid capital market” in the region. While firms in the U.K. will maintain access to EU markets because they already comply with the trading bloc’s laws, Britain will also be able to “deregulate away unnecessary rules” following Brexit.