Since mid-November, the value of bitcoin — shown in U.S. dollars, according to Bitcoinity.org — has rocketed up and plummeted. Grayed area denotes the daily price ranges, and the date range ends on Jan. 17. 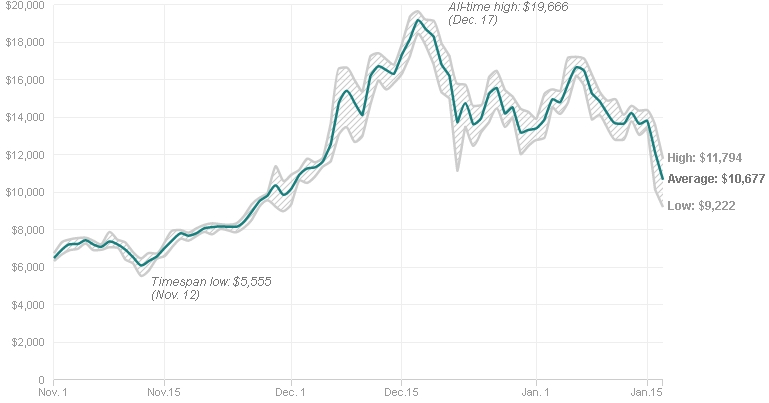 Over the last month, in a series of volatile swings, the price of the cryptocurrency bitcoin rose to a record high — then plunged to less than half that value.

The abrupt changes have inspired comparisons to the dot-com bubble, and underscored the extremely speculative nature of investing in cryptocurrency.

By Wednesday, the price of bitcoin fell below $10,000 for the first time since Dec. 1, at one point dropping to less than $9,300 on one exchange (still significantly higher than the price just a few months ago). The price has risen back to around $12,000, but economists and investors are unsure how long it will stay there.

Some speculate the recent slide was due to fear over regulatory crackdowns on the cryptocurrency market.

Cryptocurrency trading hotbed South Korea has suggested a ban on trading might be possible, though the country has not yet finalized any plans. Similar reports recently circulated about China. The anxiety over anticipated crackdowns may have helped trigger a selloff across the cryptocurrency market Tuesday.

The largest and best-known of hundreds of digital currencies, bitcoin is a decentralized digital currency that is bought and sold in exchanges internationally.

“It’s not based in dollars,” Timothy Lee, a senior reporter at Ars Technica, told NPR’s Scott Simon. “Instead, it has its own currency, just called the bitcoin. And its value floats against other currencies the same way the dollar and the euro float against each other.”

“Bitcoin is based on a revolutionary technology. Users say it’s got this very effective system for verifying transactions,” NPR’s Uri Berliner reports. “And bitcoin believers point out that this currency’s not tied to the whims of any government. And they say that’s a good thing.”

But the recent price fall may not be a good thing for investors, who are still trying to figure out what the crash means for the future of the cryptocurrency. Many other digital currencies have shown similar swings in recent days.

In the wake of this week’s crash, the top post in the Reddit forum /r/CryptoCurrency was about how to contact a suicide hotline, apparently a response to distress on the part of recent investors.

Some economists say this is a familiar pattern.

“Twenty years ago, the technology stocks and new Internet stocks achieved an excess valuation of $7 trillion because of speculation,” said David Kotok, chairman and chief investment officer of Cumberland Advisors. “The prices of shares were bid up to very high levels. When they collapsed, investors … they got very hurt. We see similar characteristics in cryptocurrencies right now.”

Investors saw a similar rise and fall in bitcoin prices in December 2013. Bitcoin hit what was a record price of around $1,150 and fell by 40 percent just days later, after China announced that it was banning banks from trading the cryptocurrency.

And there have been dramatic rises and falls in the price of the cryptocurrency within the last year.

Early in 2017, bitcoin was valued around $900. It tripled its value within months — then, by the end of the year, tripled again.

“I think [cryptocurrencies] are highly speculative,” Kotok said. “Putting money into cryptocurrencies is a speculative thing to do. You might make a profit, but what we are seeing is people who — in the last month or two — put money into bitcoin, are having trouble getting cash back when they sell and are now watching the price fall and panicking.”

Some say that bitcoin shows promise. Peter Thiel’s Founders Fund invested between $15 million and $20 million in the digital currency this month, according to The Wall Street Journal.

Economists aren’t so sure. Some analysts believe that the cryptocurrency might be trying to find a temporary price floor, but Citigroup analysts think that the price of bitcoin could plummet again to half of its current value, CNBC reports.

On Dec. 9, Ars Technica’s Lee had an uncertain prediction for the future of the cryptocurrency.